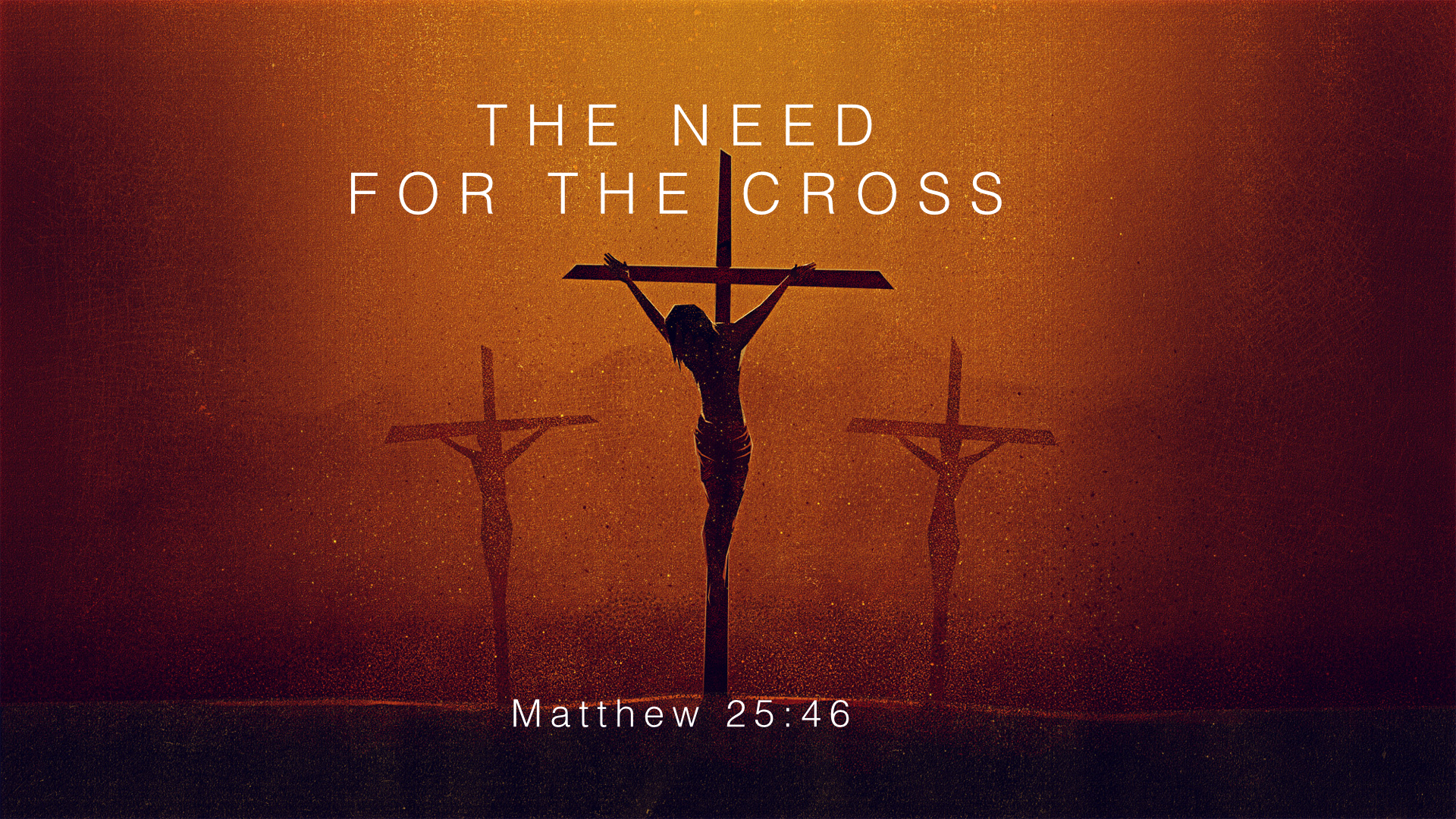 Palm Sunday is typically remember for the triumphant entrance of Christ into Jerusalem. From the Jew’s point of view in that day, this was the highlight of His ministry. And yet by Friday He was hanging on the cross, dying the tortured death of a criminal. What went wrong in five days to fall from the most popular Jew in Israel to the depths of the same people calling for His crucifixion?

From a human perspective, this was a tragic end to a good man’s life. Yet when we look at what God has to say about it, there is a much bigger plan being worked out.

We will look at the “need for the Cross” and then finish with the “Cross meets the need.”  Here are the unmistakable gospel truths found in Scripture:

Everyone that is conceived will live forever … somewhere.

Matthew 25:46 And these will go away into everlasting punishment, but the righteous into eternal life.”

There are just two choices. What makes the difference in where we spend eternity? • Everything we do will be judged.

Ecclesiastes 12:14 For God will bring every work into judgment, Including every secret thing, Whether good or evil.

Hebrews 9:27 And as it is appointed for men to die once, but after this the judgment. We will all stand before God one day. What will make the difference in where we spend eternity?

By ourself, our good works are filthy when compared to the holiness of heaven.

Isaiah 64:6 But we are all like an unclean thing, And all our righteousnesses are like filthy rags; We all fade as a leaf, And our iniquities, like the wind, Have taken us away.

If the best works I have are not good enough, what makes the difference in where we will spend eternity?

Matthew 23:33 Serpents, brood of vipers! How can you escape the condemnation of hell?

Spoken to men who were convinced that their good works earned them favor with God. If the best men of the day were not able to escape hell, what will make the difference for me?

This is hard to accept, but we must correctly diagnose our problem if we are going to be able to find the solution. To ignore the diagnosis, is to live in denial and ultimately to die in denial.

Romans 6:23 For the wages of sin is death, but the gift of God is eternal life in Christ Jesus our Lord.

If I can’t identify the problem, I will never have access to the solution.

I want to say this in all kindness for each of us sitting here. I am not passing judgment on any of our loved ones who are no longer with us, God knows their heart. I am saying this for us here to look at our own hearts. The sad news is that there are a lot of good men and women who are going to hell because good works will never replace the death penalty for sin.

Is this fair? If God was fair, the death penalty would already have been given and God would still be loving, merciful, and good. God is not fair, thankfully.

The good news is that God is also a God of love.

There is a solution to the diagnosis of sin.

John 3:16 For God so loved the world that He gave His only begotten Son, that whoever believes in Him should not perish but have everlasting life.

The solution is that Someone had to die for your sin and mine.

The wages of sin will always be death.

Romans 5:8 But God demonstrates His own love toward us, in that while we were still sinners, Christ died for us.

He took our death penalty.

Remember Matt 25:46? There are two destinations.  God made the way, God did the work, we are left to believe this was for us or deny it.

This satisfies the death penalty for all our sins we have committed, are committing, and will ever commit in the future.

So why not get saved and then live however we want to? God did not save us from the pit latrine of sin only to have us jump back in and play. We underestimate the filthiness of sin and undervalue the gift of salvation if we do this. Christ’s death was to save us from the penalty of sin and from slavery to sin.

Romans 6:1–2 What shall we say then? Shall we continue in sin that grace may abound? Certainly not! How shall we who died to sin live any longer in it?

Romans 6:16–18 Do you not know that to whom you present yourselves slaves to obey, you are that one’s slaves whom you obey, whether of sin leading to death, or of obedience leading to righteousness? But God be thanked that though you were slaves of sin, yet you obeyed from the heart that form of doctrine to which you were delivered. And having been set free from sin, you became slaves of righteousness.

So let’s take a look at this death that was given for me. The suffering began in the garden of Gethsemane.

Matthew 26:38 Then He said to them, “My soul is exceedingly sorrowful, even to death. Stay here and watch with Me.”

An angel had to come and strengthen Christ. This sorrow is the curse of sin (Gen. 3) that was placed on the world. He took our guilt on Himself (Isa. 53).

The pain of omniscience and anticipation

Luke 22:41–44 And He was withdrawn from them about a stone’s throw, and He knelt down and prayed, saying, “Father, if it is Your will, take this cup away from Me; nevertheless not My will, but Yours, be done.” Then an angel appeared to Him from heaven, strengthening Him. And being in agony, He prayed more earnestly. Then His sweat became like great drops of blood falling down to the ground.

Hematidrosis – bleeding from the sweat glands. This is a documented physical situation brought on by extreme stress and anguish. The first six documented cases went on to die of the same stress.

The pain of betrayal and abandonment

Close Friends – Matthew 26:56b Then all the disciples forsook Him and fled.    

The pain of mocking the truth of His Godhood

By the soldiers – mocked Him by saying “Hail, King of the Jews,” put a purple robe on Him, bowed to Him, and “worshiped” Him. By the Jews when on the cross – “He saved others, Himself He cannot save” Mk. 15:31

The pain of physical abuse and assault

“Until we see the cross as that which was done by us, we will never fully appreciate that it was done for us” – John Stott

The pain of sin to holiness

Trinity rent – we don’t understand the Trinity as it is, but somehow the Trinity was severed as the Father turned His back on Christ as He bore my sins.

No one, He gave Himself willingly for you and me. He did not suffocate, He gave up His spirit.

1 John 3:16 By this we know love, because He laid down His life for us. This is the demonstration of love.

Romans 8:31–32 What then shall we say to these things? If God is for us, who can be against us? He who did not spare His own Son, but delivered Him up for us all, how shall He not with Him also freely give us all things?

So what will you do with the cross?  Will you believe in Jesus and receive His work on the cross to be bridge that brings you to God?

Repent and believe in Jesus today!