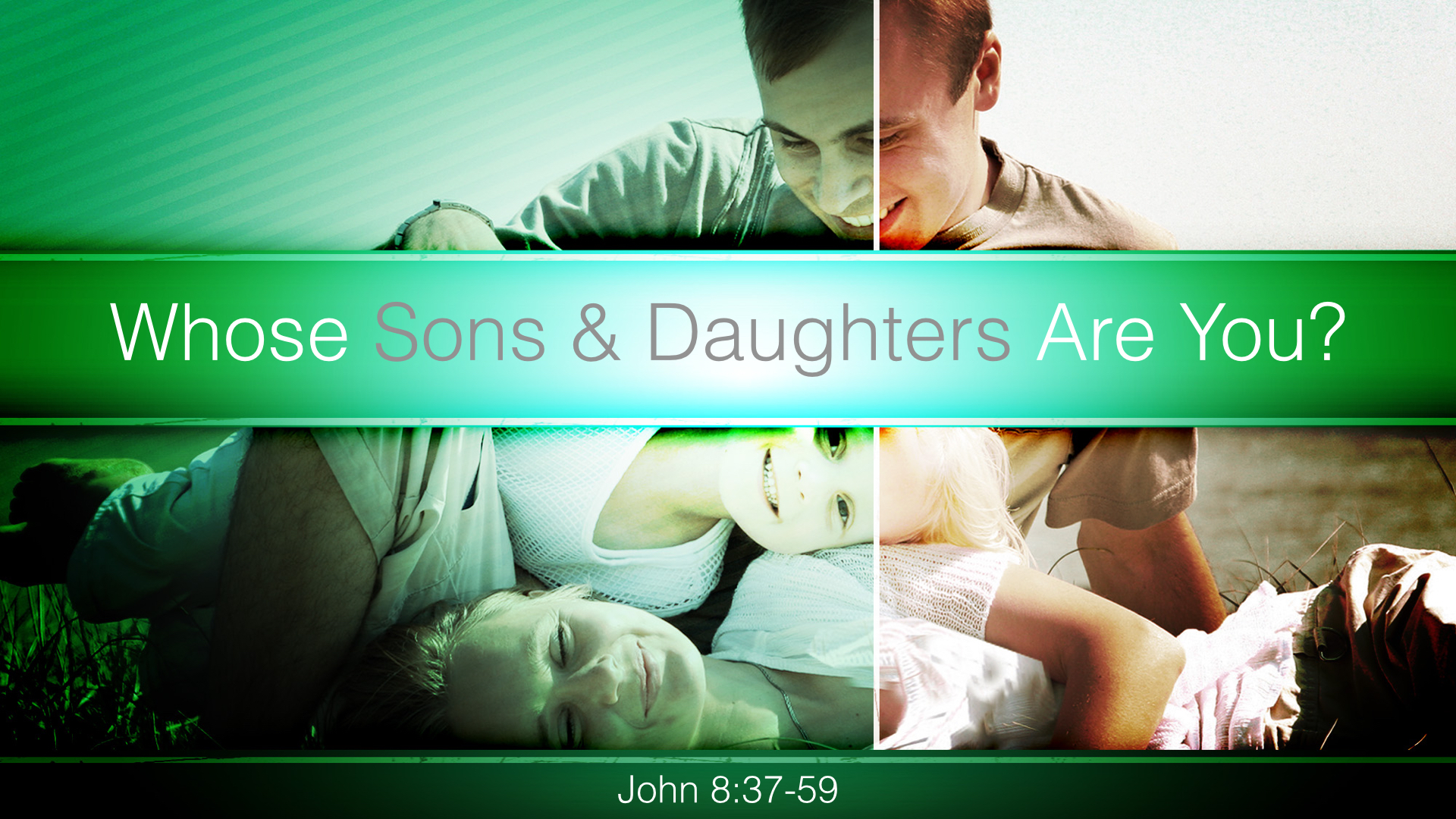 Jesus’ public ministry was marked by increasing levels of conflict and opposition from the religious leaders of his day, the Pharisees.

It was ultimately this conflict which God used to bring to pass his plan eternal plan for Christ—that he would suffer a violent death as the penalty for sin and become the substitute to anyone who comes to him in faith.

“I speak of what I have seen with my Father, and you do what you have heard from your father.” (John 8:38)

Jesus is drawing a connection between his actions and his father and between the actions of the Jews and their father.

What does Jesus mean by this?

In Jesus’ time and culture, it was common describe a characteristic of a person by referring to them as the “son of…” someone or something.  Some examples: Judas (the disciple who will later betray Jesus, his master) is called the “son of destruction” (John 17:12).  Joseph (a Christian in the early church) is was nicknamed Barnabas “son of encouragement” (Acts 4:36).

By using this same idea, Jesus is challenging the stubborn unbelief of the Jews who were refusing to joyfully accept him as their Messiah.

The Spiritual Blindness of the Jews

They were foolishly trusting that their very ancestry made them right before God. “They answered him, “Abraham is our father.” (John 8:39a)

Abraham was the father of the Jewish nation. More importantly, God had made a special covenant to Abraham (symbolized by circumcision), that his descendants would become a great nation and would inherit the land of Israel.

“Now the LORD said to Abram, ‘Go from your country and your kindred and your father’s house to the land that I will show you. 2 And I will make of you a great nation, and I will bless you and make your name great, so that you will be a blessing. 3 I will bless those who bless you, and him who dishonors you I will curse, and in you all the families of the earth shall be blessed.’” (Genesis 12:1–3; see also 15:1–20)

However, God had made this promise to Abraham when he and his wife, Sarah, were childless and beyond child-bearing years. Yet God miraculously allowed Sarah to conceive and bear Isaac, the child of promise. God later tested Abraham’s faith in him again by asking Abraham to sacrifice Isaac, the child of promise. Yet God intervened when it was clear Abraham was going to obey God. As a result of all of this, Abraham, the father of the Jewish nation was a hero and was held up as an example of belief in God and faith in his promises.

The Jews in our passage are thinking of all of this and are confident that they have a high standing before God because of their connection to Abraham and their membership in God’s covenant.

Jesus exposes the problem in their heart. He tells them that if they were really children of Abraham, they would be marked by the same faith and belief in God. “Jesus said to them,

“If you were Abraham’s children, you would be doing the works Abraham did, but now you seek to kill me, a man who has told you the truth that I heard from God. This is not what Abraham did.” (John 8:39–40).

Why is their negative response to Jesus so significant? Because Jesus clearly demonstrated to them that he was the promised Messiah—the one who would come from Abraham’s descendants and be a blessing to all the families of the earth. John the Baptist had earlier warned Israel of the same error:

“Bear fruit in keeping with repentance. And do not presume to say to yourselves, ‘We have Abraham as our father,’ for I tell you, God is able from these stones to raise up children for Abraham.” (Matthew 3:8–9).

“Know then that it is those of faith who are the sons of Abraham. 8 And the Scripture, foreseeing that God would justify the Gentiles by faith, preached the gospel beforehand to Abraham, saying, “In you shall all the nations be blessed.”

“So then, those who are of faith are blessed along with Abraham, the man of faith.” (Galatians 3:7–9)

He warns that the God is not their heavenly Father since they are rejecting him whom he sent.

“Jesus said to them, “If God were your Father, you would love me, for I came from God and I am here. I came not of my own accord, but he sent me. Why do you not understand what I say? It is because you cannot bear to hear my word. (John 8:42–43)

He shows them that the Devil (Satan) is their real spiritual father because they are doing exactly the same things that Satan does.

“Why do you not understand what I say? It is because you cannot bear to hear my word. You are of your father the devil, and your will is to do your father’s desires. He was a murderer from the beginning, and does not stand in the truth, because there is no truth in him. When he lies, he speaks out of his own character, for he is a liar and the father of lies.” (John 8:43–44)

The Jews’ Wrong Perspective of Jesus

They instead imply that Jesus himself was an illegitimate child (8:41) and the accuse him of being possessed by a demon (48).

They refused to believe that Jesus was the Son of God.

Jesus makes a number of unmistakable claims to possess the same nature and power as God:

That he has the power to give eternal life “Truly, truly, I say to you, if anyone keeps my word, he will never see death.” (John 8:51)

That he is the fulfillment of Abraham’s messianic hopes “Your father Abraham rejoiced that he would see my day. He saw it and was glad.” (John 8:56)

That he is eternally self-existent, even from before the time of Abraham (who had been dead for two millennia). “Jesus said to them, “Truly, truly, I say to you, before Abraham was, I am.” (John 8:58) The Jews fully understand what he is claiming and unsuccessfully try to stone him (John 8:59).

Our own response to Jesus

Consider your own actions; they testify as to who your spiritual father is.

Turn to God who is able to give you a spiritual new birth by the gospel through the same kind of faith which Abraham had in the promises of God.

Download the .pdf of Whose Son or Daughter Are You?