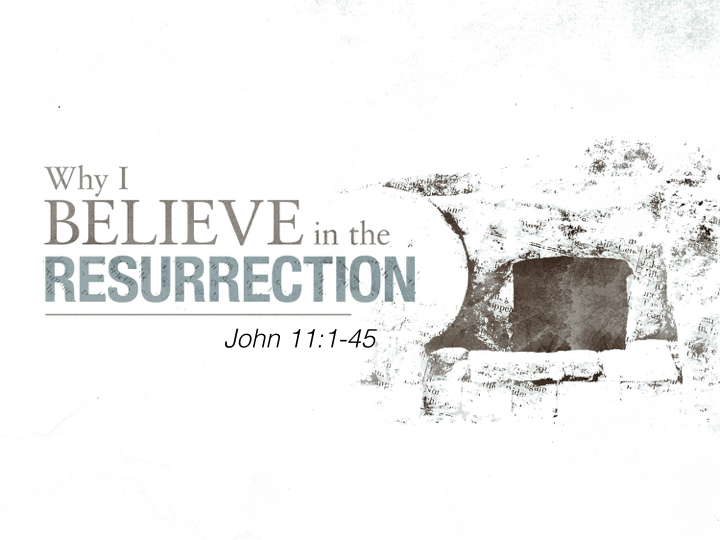 Two days ago my wife’s uncle died after a long battle with cancer. Death is not natural to life. It is not part of the original created order. We recoil from death we wish to be far from it. When we hear the footsteps of death coming for us we fight and some fear it.

Yet none of us speak of death in terms of “if” but always with the word “when”. Deep inside we know that one day we will “walk through the valley of the shadow of death.”

Why do people die? Why do humans face pain and death?

There is one answer – Sin. When Adam sinned, sin entered the entire human race (Romans 5:12). Adam’s sin brought death and death spread to everyone, for everyone has sinned.

Today I want to share with you two overwhelming, undeniable life-changing reasons why I believe in the resurrection.

When the message came they identified Lazarus, not by name but by the phrase, “the one whom you love.” The word for love speaks of friendship love (3). In other words these sisters were saying to Jesus “the friend who you love is sick!”

They knew Jesus loved them! In verse five we again see the word love. Here it is the Greek word agape and this refers to the sacrificial, undying faithful covenant love that finds its source in God Himself. They knew that Jesus loved them and we know that God loves us! He tells us that He loved us and he proved that love to us:

John 3:16 ¶ “For God so loved the world that he gave his only Son, so that everyone who believes in him will not perish but have eternal life.

Rom. 5:8 But God demonstrates His own love toward us, in that while we were still sinners, Christ died for us.

First Jesus cares about the glory of His Father! Christ’s delay in coming to Bethany was to fulfill God’s purpose, and that purpose was ultimately the glory of God.

We may not know why we are in the situation or circumstance that we are going through, but God does!

Jesus says, “This illness does not lead to death. It is for the glory of God, so that the Son of God may be glorified through it.” (4) Even in death, sorrow, pain, and tragedy – God is with us and God is at work carrying out His plan.

Second we see that Jesus cares that we develop faith. “Lazarus is dead, but I am glad I was not there, so that you might believe!” (15). Later when he arrived at the funeral home “he was deeply moved in his spirit and greatly troubled.” (33) Jesus wept (35). Jesus is our compassionate High Priest who feels our weaknesses and pain.

Heb. 4:15 For we do not have a High Priest who cannot sympathize with our weaknesses, but was in all points tempted as we are, yet without sin.

Mary & Martha believed in Him but their understanding of Him was incomplete. They were called to re-evaluate their faith. In times of tragedy, pain, death – we often respond this way: “IF ONLY!” “Lord, if you had been here, by brother would not have died” (21,32). God if only you had been here this would not have happened! But Jesus was fully aware of what was taking place and his delay was part of God’s plan. He could have rushed in and averted the death, but instead He was working for a greater purpose (6).

A couple years ago our family had traveled abroad and we took the kids to a fast-food restaurant that had an indoor play park. Corban was probably three at the time. A little bully pushed him off the top of the kids slide and then a minute or two later hit him in the face. All of my father-instinct wanted to snap up that little bully and teach him a lesson in defense of my boy. But instead I encouraged Corban to persevere – and yes if he gets hit again to defend himself. I think that incident gives me some insight into our text. Jesus could have saved Lazarus’ life and healed him from a distance, he could have spared Mary and Martha the pain, but instead He allowed it for a greater purpose – that they and us might believe!

Christ’s assurance – Jesus gave Mary and Martha the absolute certainty of the resurrection. “Your brother will rise again” (23). I know he will rise again at the last day was her response.

Job 19:25-26 For I know that my Redeemer lives, And He shall stand at last on the earth; And after my skin is destroyed, this I know, That in my flesh I shall see God.

Christ’s person – “I am the resurrection and the life.” (25) Jesus assured them that Lazarus would rise again because of who He is: I am LIFE!

Jn 14:6 – Jesus said, “I am the way, the truth and the life, no one will come to God the Father except through ME”

This is an exclusive claim! He is either telling the truth or he is the greatest deluded fool the world has ever produced! To stand in front of a grieving sister and claim to be the resurrector and giver of eternal life is either truth or the most wicked, gross kind of torture one could give to a grieving soul. Either Jesus Christ knew he was not what He claimed and thus He is a LIAR, or He really believed what He claimed but it was not true and He is a LUNATIC, or He is who He claims to be and you and I must fall before Him and acknowledge him as LORD.

Those who believe in Jesus though they may die physically, they will live because He will raise them up. (25). In this text death is referred to as sleep because it was temporary (11,13-14)

Since everyone who lives and believes in Him has eternal life they will never die spiritually. Spiritual life cannot be extinguished by physical death. (26)

This is question is for you today: DO YOU BELIEVE IN JESUS?

This is a penetrating question!  Do you personally believe that Jesus Christ is the resurrection and the life? It is one thing to hear it, discuss it, or argue about it, but it is another altogether to believe it , embrace it and trust it!

Death strips us of all pretense and exposes what we truly believe: “Yes Lord; I believe that you are the Christ (Savior) the Son of God (Diety) who is coming into the world.” (27). This is more than believing that Jesus is merely a historical figure, a great teacher, or a moral leader.

You are not being challenged to believe a fantasy.

Jesus proved He was who He claimed to be – He raised Lazarus from the dead, after four days, after the processes of death and decay were undeniable. (39,44) Jesus went on to demonstrate His power over death by rising from the dead on the third day! (20:11,15; 19-20; 24-29). He arose – death cannot dominate Him!

Rom. 6:9 knowing that Christ, having been raised from the dead, dies no more. Death no longer has dominion over Him.

Heb. 2:14 Inasmuch then as the children have partaken of flesh and blood, He Himself likewise shared in the same, that through death He might destroy him who had the power of death, that is, the devil, 15 and release those who through fear of death were all their lifetime subject to bondage.

The proof that the gospel is true is that Jesus rose from the dead. The good news is that you can be forgiven for your sins and made a child of God through faith in Jesus Christ and His death and resurrection.

Rom. 10:9 that if you confess with your mouth the Lord Jesus and believe in your heart that God has raised Him from the dead, you will be saved.

Acts 17:30-31 Truly, these times of ignorance God overlooked, but now commands all men everywhere to repent, because He has appointed a day on which He will judge the world in righteousness by the Man whom He has ordained. He has given assurance of this to all by raising Him from the dead.”

There are three powerful implications of the resurrection:

And there are two possible responses to the resurrection:

What about you? Will you believe in Jesus today?