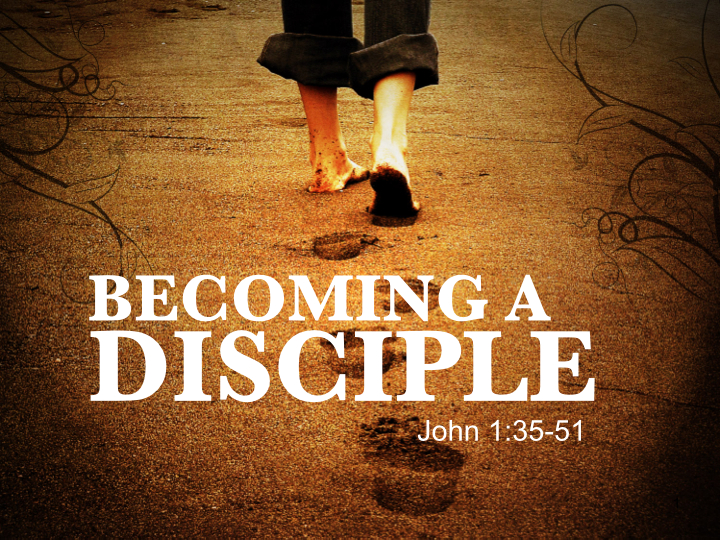 I read this helpful reminder that sets the context for our study today:

The Founder of Christianity is Jesus Christ.

The Goal of Christianity: change men and women through regeneration.

The Method of Christianity: Internal salvation through faith in Jesus Christ – and that is the main point of what we have seen thus far in our study in John chapter one.

The Means of Christianity: The good news of salvation is not spread through political, educational or religious philosophies but through Disciples.

What is a disciple?

A person becomes a member of a political party by registering and receiving a party card.

Many people today identify their spirituality by wearing special clothes, head coverings, necklaces or by cutting their hair in a special way. ILL: Moslem women burka & men skull cap, Hindu red dot (bindi), Catholicism – beads, necklaces, Orthodox Jew – tassels and yarmulke All of these things are symbols of identification of the god they worship.

But what about becoming a disciple of Jesus Christ?

Becoming His disciple is not about external identification of spirituality by wearing special clothes, necklaces or by cutting your hair in a special way. A person does not become a disciple of Jesus Christ by joining a church or by participating in spiritual rituals.

Becoming a disciple means that you become a follower of Jesus Christ. What are the implications?

35 Again, the next day, John stood with two of his disciples. 36 And looking at Jesus as He walked, he said, “Behold the Lamb of God!”
37 The two disciples heard him speak, and they followed Jesus. 38 Then Jesus turned, and seeing them following, said to them, “What do you seek?”
They said to Him, “Rabbi” (which is to say, when translated, Teacher), “where are You staying?”
39 He said to them, “Come and see.” They came and saw where He was staying, and remained with Him that day (now it was about the tenth hour).
40 One of the two who heard John speak, and followed Him, was Andrew, Simon Peter’s brother. 41 He first found his own brother Simon, and said to him, “We have found the Messiah” (which is translated, the Christ). 42 And he brought him to Jesus.
Now when Jesus looked at him, He said, “You are Simon the son of Jonah. You shall be called Cephas” (which is translated, A Stone).

There are three big ideas found in our text this morning:

BECOMING A DISCIPLE IS A PERSONAL DECISION

You cannot “Behold the Lamb” and not decide for or against Him!

Investigate the claim for yourself

This claim demands action on our part = they left John and followed Jesus to find out for themselves if He was the Messiah. (35-37)

The way these five men came to Christ was different from one another:

You will be forced to a decision. Discipleship begins with genuine faith. “Behold the Lamb of God” demands a response of faith:

C. S. Lewis, who was a professor at Cambridge University and once an agnostic, understood this issue clearly.

“I am trying here to prevent anyone saying the really foolish thing that people often say about Him: ‘I’m ready to accept Jesus as a great moral teacher, but I don’t accept His claim to be God.’ That is the one thing we must not say. A man who was merely a man and said the sort of things Jesus said would not be a great moral teacher. He would either be a lunatic ‑ on a level with the man who says he is a poached egg ‑ or else he would be the Devil of Hell. You must make your choice. Either this man was, and is, the son of God: or else a madman or something worse.”

“You can shut Him up for a fool, you can spit at Him and kill Him as a demon; or you can fall at His feet and call Him Lord and God. But let us not come up with any patronizing nonsense about His being a great human teacher. He has not left that open to us. He did not intend to.”

Personal decision. One becomes a disciple by coming to the cross in humble faith, accepting that the work of Christ on the cross was sufficient to deliver me from all sin. I repent of my sin and receive the Lord Jesus Christ by faith alone. This act is one of obedient surrender (Mt. 16.24, Mk. 8.34, 10.21, Lk 9.23).

BECOMING A DISCIPLE IS LIFE-CHANGING

It means heading in a different direction

John & Andrew were fishermen, following Jesus for them would mean leaving nets and becoming fishers of men.

“What are you seeking?” (38) A question that drove John & Andrew to evaluate their motives. Some are seeking approval of peers, financial gain, quick fix to current problems.

You are Simon – you will be Peter (42). Gave Peter hope that in spite of his instability, undependability, brashness, unpredictability Jesus would make him a rock that God would use to found the church in the Book of Acts.

It means following a different person

It means becoming a different man/woman

“Give me all of you!!! I don’t want so much of your time, so much of your talents and money, and so much of your work. I want YOU!!! ALL OF YOU!! I have not come to torment or frustrate the natural man or woman, but to KILL IT! No half measures will do. I don’t want to only prune a branch here and a branch there; rather I want the whole tree out! Hand it over to me, the whole outfit, all of your desires, all of your wants and wishes and dreams. Turn them ALL over to me, give yourself to me and I will make of you a new self—in my image. Give me yourself and in exchange I will give you Myself. My will, shall become your will. My heart, shall become your heart.” – C.S. Lewis, Mere Christianity

BECOMING A DISCIPLE IS SOMETHING WE WILL WANT FOR EVERYONE

One identification marker of a genuine disciple is that they long for others to come to Christ! (41-42, 45) The Good News of salvation is not spread through political, educational or religious philosophies, but through DISCIPLES! God intends for us all to be in the game not sitting in the stands.

FIVE MEN met Jesus and were convinced that He is indeed the “Lamb of God who takes away the sins of the world.” What about you?  Will you receive the sweet invitation offered to you today and become a disciple of Jesus Christ?

Have you received Jesus Christ as your Lamb to take away your sins?

You can down load as a pdf Becoming A Disciple here.