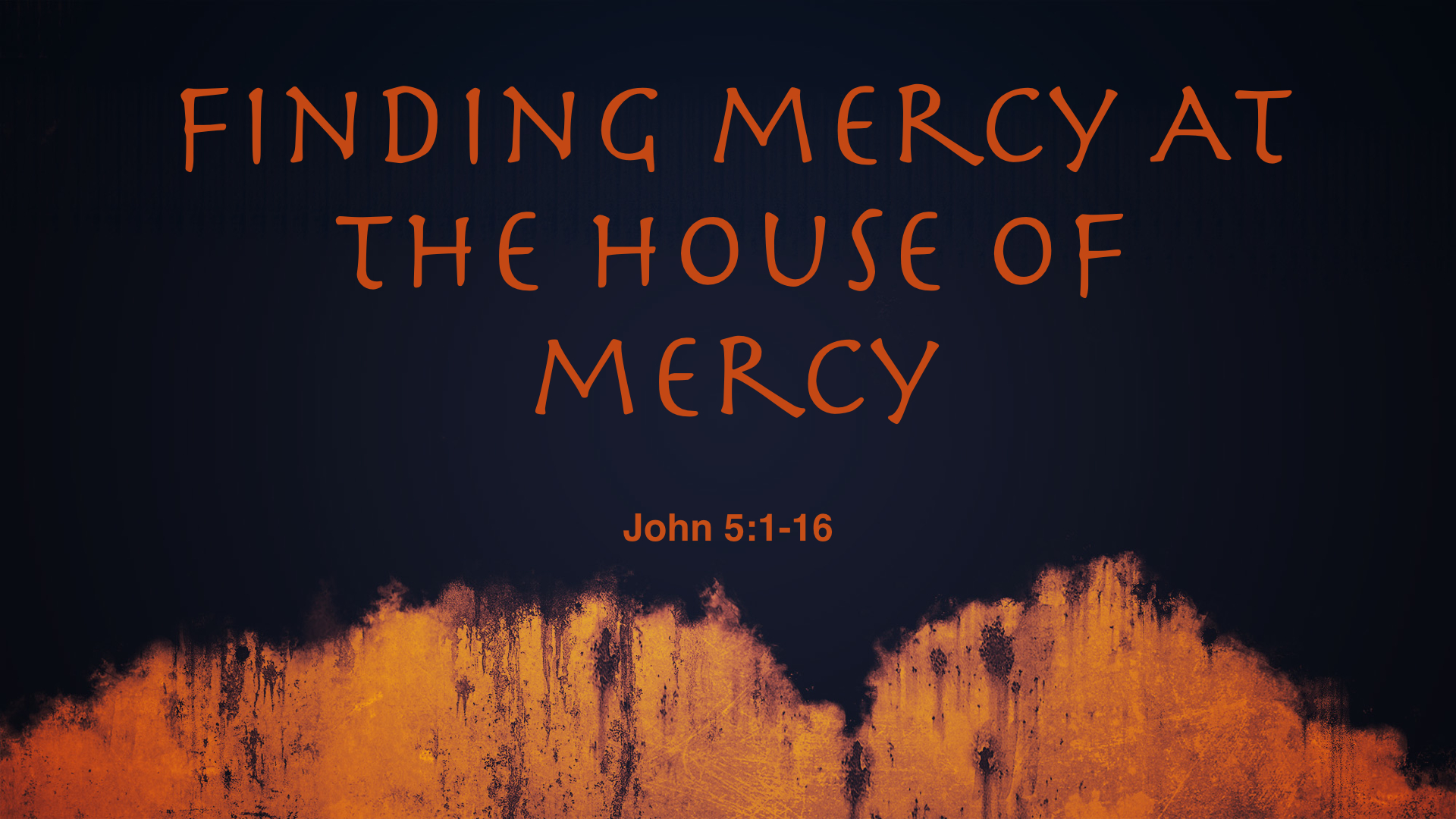 Remember what John is doing – he is laying out a case for us the readers, that Jesus is God and that He is the only way for us to come to God.

John is not recording everything Jesus said or did. Instead he is narrating key actions and teachings that leave us with no doubt about the person of Christ! He is the Savior of the world!

The word that we find repeated over 100x in the the Gospel of John is “Believe!” John is making his case throughout the book that Jesus Christ is God and therefore we must believe in Him.

In our text we find the God of Mercy showing mercy to a helpless man at the “House of Mercy.”

Jesus has traveled from Galilee back to Jerusalem, he enters through the Sheep Gate and comes to the Pool of Bethesda.

Three words that are used in close association with one-another in Scripture:

Grace – God’s goodness toward those who only deserve punishment.

Patience or Long-Suffering – God’s goodness to withhold punishment toward those who sin over a period of time.

Exodus 34:6 And the Lord passed before him and proclaimed, “The Lord, the Lord God, merciful and gracious, longsuffering, and abounding in goodness and truth, keeping mercy for thousands, forgiving iniquity and transgression and sin

Psalm 103:8The Lord is merciful and gracious, Slow to anger, and abounding in mercy

There are three foundational truths about God’s Mercy that we must understand if we are to clearly understand what is happening in today’s story!

His mercy is freely offered

Micah 7:8
Who is a God like You, Pardoning iniquity And passing over the transgression of the remnant of His heritage? He does not retain His anger forever, Because He delights in mercy. God relishes the opportunity to grant mercy!

Matthew 9:27
When Jesus departed from there, two blind men followed Him, crying out and saying, “Son of David, have mercy on us.

His mercy is without limit

Psalm 25:6 Remember, O Lord, Your tender mercies and Your lovingkindnesses, For they are from of old

Isaiah 54:8 With a little wrath I hid My face from you for a moment; But with everlasting kindness I will have mercy on you,” Says the Lord, your Redeemer.

Psalm 86:5 For You, Lord, are good, and ready to forgive, And abundant in mercy to all those who call upon You.

Psalm 103:7-12
The Lord is merciful and gracious,
Slow to anger, and abounding in mercy.
He will not always strive with us,
Nor will He keep His anger forever.
He has not dealt with us according to our sins,
Nor punished us according to our iniquities.
For as the heavens are high above the earth,
So great is His mercy toward those who fear Him;
As far as the east is from the west,
So far has He removed our transgressions from us.

Abounding in mercy! Do you really understand the picture here? Imagine for a moment a small fish in a pool at the foot of the mighty Victoria Falls. Imagine him swimming around anxious and fearful that there might one day not be enough water for him to drink. You would say, “Silly little fish, drink as much water as you wish. Victoria Falls is abounding in water.” That is what God is saying about His mercy! No matter what you have done, how far you have traveled from God in sin, no matter how dark your life has become, God delights in offering you mercy!

THE MERCY OF CHRIST’S UNSOLICITED INTERVENTION (1-6)

The significance of the context (1-5)

Jesus traveled from Galilee to Jerusalem. He came through the Sheep Gate into the city. Just inside the Sheep Gate was the pool of Bethesda (Five Porches).

This pool of Bethesda provides an instructive backdrop to what God wants us to learn about Jesus. Beth means House. ‘Chesed’ means mercy. Literally this means the House of Mercy. This was the House of God’s goodness toward those in misery and distress.

Lying under the porches surrounding this pool was a multitude of people suffering with various distressing physical handicaps. They were assembled because of a slim hope; every once and awhile an angel would come and stir the water and when that happened the first handicapped person who steped into the moving water would be healed.

It is also very likely that these suffering multitudes benefited from the “alms-giving” of the residents and visitors to Jerusalem who visited the pool.

Christ sought this man out of the crowd (6)

Three things are revealed about Christ in verse six.

First we see a display of His mercy. Jesus found the man out of the multitude and approached him. Mercy comes to find you!

Second we cannot overlook His sovereignty. There is nothing particularly significant about this man that would cause Christ should stop and intervene in his situation. Christ simply decided to stop and interact with him.

Third we see His omniscience – Jesus knew (6). Jesus saw him and immediately knew everything about him – and only God knows everything!

Jesus knew the utter helplessness of the man – He knew that he was beyond human help. He had been in that condition for 38yrs, if there was an available solution this man would have found it!

Jesus also knew the hopelessness of the man – He had been in this condition a very long time.

THE MERCY OF CHRIST’S STARTLING QUESTION (6-7)

The question is startling!

Jesus did not ask this question because He needed information. We have already seen that as God, Christ was omniscient – knew everything about this man.

Jesus often used questions to cause the person to think in a clear and fresh way about themselves, or their beliefs. Consider these examples:

As startling as Christ’s question was, the man’s response is equally startling!

You would think he would shout “YES I WANT TO BE HEALED!” Instead the man began to make excuses… “there is no one to help me into the water…”

This week I received a visit from a man who is encountering deep and troubling problems. As he explained his situation and asked for spiritual help, I pointed out that underneath all of his problems was life choices driven by sin. Tears escaped the corners of this man’s eyes as I spoke. After I shared the gospel and we prayed together the man went his way, unmoved by gracious gift of salvation offered to him by Christ.

Often we hear God’s word, we encounter His promises but nothing changes.

The question is also strategic!

The lame man acknowledged is own inability.

It is at this very point where many of us falter. We think that if we just try harder, get some additional therapy or counseling we can eventually solve our own problem.

He also acknowledged his own longing. Jesus was forcing him to consider if he really desired healing, or was laying by the pool an accepted way of life? Was he was resigned that this was the way His life would be? Was he prepared to possibly lose a good living from receiving the alms from well-wishers?

Application:
Let me ask you this same question: In your current situation, “Do you want to be made well?”

For many people Christ looks good from a distance, but when we get up close to Him we find that He makes many demands. Many peole will get close enough to Jesus to catch a glimpse of these demands and then turn back (see Jn. 6:66). Some people will attend church, listen intently for a period of time then disappear. What happened? They did not want to be made well!

One day an older gentleman knocked at my gate asking for help. The trousers covering his right leg had been cut up above the knee. The gentleman’s leg was more than two times its normal size. Around his ankle and food the swelling had caused the skin to split open in several places, and was oozing infection. The gentleman pointed out that the two marks just above the ankle was where the snake had struck him. I was more than happy to help the elderly man with taxi money and some funds to pay for medical treatment. He went his way thanking me profusely. About a week later, I was up working on my roof when I heard someone banging on my neighbor’s gate. There was the same elderly gentleman, the foot had not been treated. He was asking my neighbor for help. With a shout I let my neighbor know that I had given to help this man with the same problem just a week earlier. What was the problem? This man did not want to be made well!

Christian, The question is the same: “Do you really want to be healed?”

Sometimes we fail to recognize these things in our hearts. They lie covered over by the leaves of denial, but they are crippling us spiritually! We lack joy, power for life and ministry, and peace!

God’s mercy is extended to you today! His long-suffering love toward you withholds His judgement upon you! His grace is yours for the asking!

THE MERCY OF CHRIST’S POWERFUL ENABLEMENT (8-9)

This man did not have the ability to obey the command: “rise, take your bed and walk” (8). Here is the reality that you must recognize – when Christ commands the impossible his commands are His enablements (9).

Here in this verse we see the fourth attribute of God in this text. We saw that Christ is merciful, sovereign and omniscient. Now we are faced with Christ’s omnipotence. Only God can command a paralyzed man to get up and walk and then enable him to obey that command!

He heard the command – sometimes we hear without hearing! (8) I often ask my kids, “did you hear me?” My question is not did they hear my words, but when I speak the expectation is that they will respond.

He believed the command. The lame man moved into action (9).

He obeyed the command. He jumped up, grabbed the bedroll and walked!

There is a sober warning to us in this story! (10-15) This man reminds us that the majority of people in Christ’s day experienced the mercy of God yet they refused to believe in Him as Messiah! It seems that he never believed in Jesus (14).

Perhaps you have tried to get up and put your life together a hundred times over – and have failed each time. Believe in Jesus, receive his forgiveness and life!

Dear friend, repent and believe in Jesus! Acts 3:19 Repent therefore and be converted, that your sins may be blotted out, so that times of refreshing may come from the presence of the Lord,

What commands of Christ appear impossible to you?  Perhaps it involves you as a husband loving your wife or you as a wife respecting your husband! Maybe it is the command to forgive someone who has wronged you. Or maybe you need to share your faith with someone.