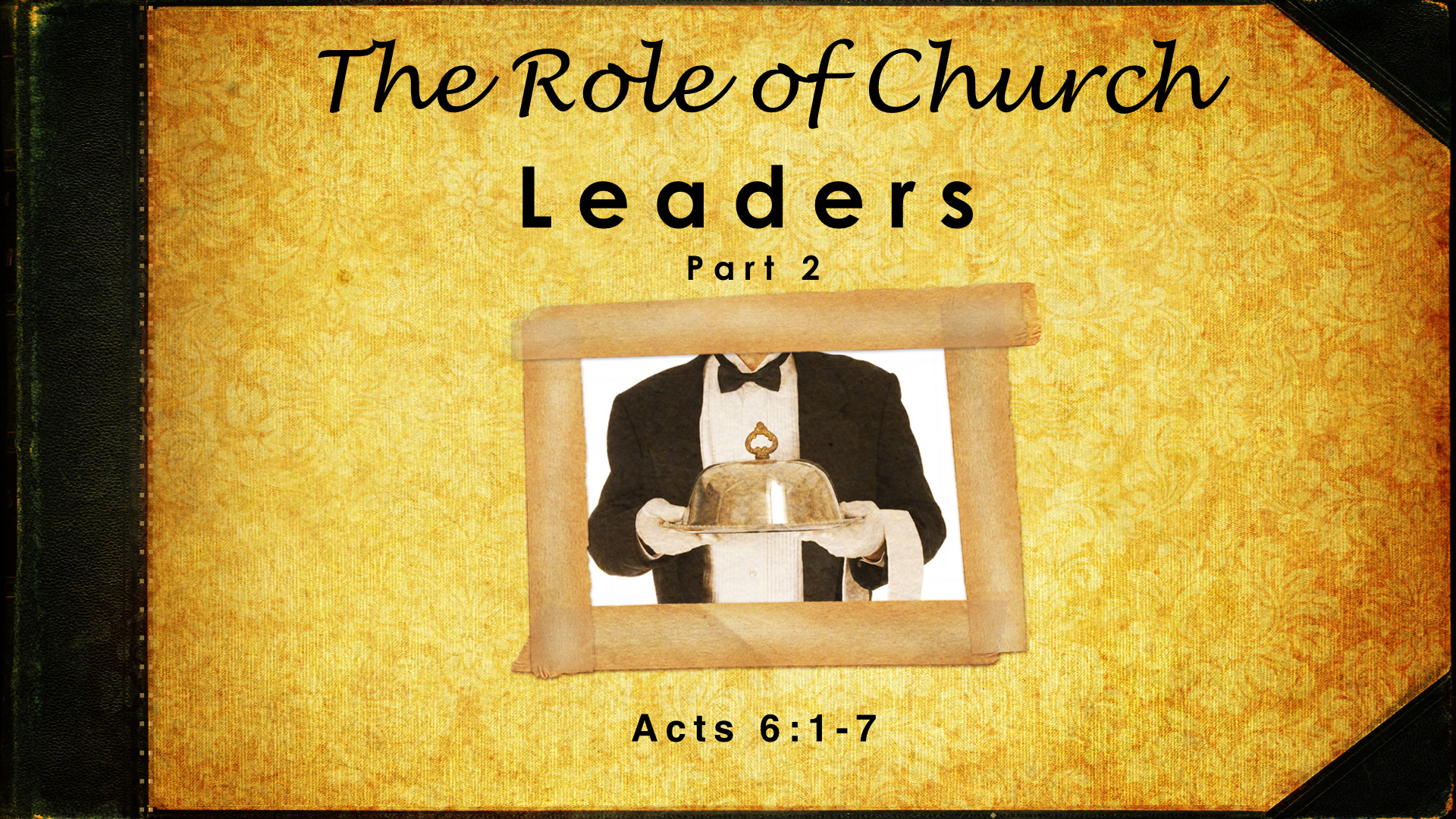 As we approach the book of Acts we do well to remember that this is a narrative of what happened in the early days of the church.  As a record of history, the Book of Acts it contains doctrine, but it is not a book of doctrine.  I heard a preacher say recently, “Narrative is not normative,” and we do well to keep that in mind.

Today we are in Acts 6:1-7 taking a look at what took in the first church at Jerusalem.  There are lessons to be learned on the role of church leadership, lessons that apply to Kitwe Church.

The church is a living body of which Christ is the head and every believer a member of His body.  The Holy Spirit of God indwells individual believers with the life of Christ.

Biblical church organization then is never an end in itself only the means to facilitate what the Lord is doing in His church. So let’s look at how the local church is organized.

God has appointed two offices in the church; the Office of Elder (also referred to as Overseer and Pastor/Shepherd) and the Office of Deacon.

The word deacon comes from the Greek word Diakonos and simply means servant.  It literally speaks of one who “waits on tables” as a server.  The word deacon is emphasizing the attitude of a servant.  Though the word deacon is not used in this text, it seems to be the first appointment of the office that would eventually be referred to as the Office of a Deacon.

THE PROBLEM IN THE CHURCH (1)

Why was the church was growing?
Because of preaching – day of Pentecost, preaching the gospel of Jesus resulted in 3000 salvation decisions, message at the Temple resulted in 5000 more people believing in Jesus (4:4).

Because the Holy Spirit gave power to those proclaiming the gospel, and brought conviction of sin to those who heard the message,

Because those who heard, responded in faith and received forgiveness offered through Jesus Christ

Problem from the outside – persecution (ch. 4). This threatened the furtherance of the gospel when the rulers commanded them to be quiet and stop speaking in the name of Jesus! The response of the Apostles was to pray for boldness to continue to preach Christ.

Problem from the inside – sinning members (5:1-11). This problem threatened the credibility of the gospel of Jesus.  If Jesus doesn’t change lives then all the claims to the power of the gospel is in vain! The response was the disciplining of the offending members.

This bring us then to the third problem mentioned, a problem from the inside of the church – dissension among the members (6:1)

When you have people from 16 different countries and language groups come together as one in Christ, there are bound to be misunderstandings! (2:8-10)

The Hellenists were the Greek speaking Jews.  These Jews had migrated to other countries and had adapted to other cultures and adopted a language other than Hebrew.  They were seen as turning their back on the culture and traditions of the orthodox Jewish faith. The Hebrews were the Hebrew speaking Jews, and they looked with disdain at the Hellenists. This was a deep cultural animosity that threatened the unity of this new church!

Solomon once said that there is nothing new under the sun.  Don’t we see this same attitude in our day?  One people group look down on another people group because of differences in language, culture or traditions.  They feel superior to others, and of course all of this is based in pride.

The complaint that was brought to the church was legitimate!  The widows of the Hellenists were in fact being neglected. People were dissatisfied because genuine needs were not being met.

THE PROBLEM SOLVING STRATEGY OF THE CHURCH (2-4)

For a church to grow, there must be a plan – The plan is people

Why is planning needed in a growing church?

The church must be organized to a level that ensures that ministry is being carried out in a meaningful way and that needs are being met.

Someone once said, “I don’t like organized religion.” Does that mean you prefer disorganized religion? We all have a part, we must all serve. If we are to function together and serve one another well there must be some plan in place.

What was the plan they enacted? (3)

For a church to grow there must be priorities (4)

Those chosen by God to serve the church must understand and fulfill their roles.

There are two full-time priorities of the pastors:

These are the priority for the pastor because of the duties he is called to perform as a Shepherd.  John Stott suggests the following as the duties of a pastor:

It is the carrying out of this priority that equips believers to accomplish the work of ministry (Eph. 4.12)

Deacons are assigned to carry out the necessary logistics of the church.

The role of the deacons is to “wait on tables.”  Paul was concerned for that needs of the poor and widows be met (Ro. 15.26, II Co. 8-9) but he never wanted to be distracted from the ministry of the Word by the logistics of the service needing to be carried out (I Co. 16.1-4).

THE PROCEDURE THE CHURCH USED TO APPOINT DEACONS (5-6)

The church made the choice (5)

The congregation from among themselves chose men with the qualifications.

Congregational rule – the church decides on all matters of appointment of leadership, and affirms the expenditures of funds or goods to be used in the ministry.

The church brought the men before the church leadership (6a)

They set them before – used in reference to setting before judges. They were examined to see if they indeed fulfilled the qualifications

The chosen were ordained as deacons (6b)

They committed these men to the task before God in prayer. They laid hands on them – symbolizing the acknowledgment and commissioning to the work which they had been called. Symbolizes approval.

Let’s wrap this up by applying what we have seen to our church right here in Kitwe!  Note two applications that

First the result of this action was that the word of God spread like a fire across the city of Jerusalem!  Is that not what we long to see happen right here in Kitwe? To see people who are lost, found to see hurting hearts healed by the power and grace of God; to see those living in darkness rescued and brought to the light!

Second the number of disciples in Jerusalem multiplied.  When God is at work, and the Word is being taught, and people are stepping up to serve the Lord, the church grows! The true church is something that is so different and beautiful that it is attractive!

So here is our plan between now and the end of the year at Kitwe Church:

My prayer is that you will come to faith in Jesus Christ if you are still contemplating the invitation of Christ to salvation!  Please accept God’s full and free forgiveness of your sin by receiving Christ right now!

For those who know Jesus Christ and have seen the beautiful work of His Spirit in your heart, commit to serving your Lord this week, to obeying Him in all things.

May God’s richest blessings be yours.

Download the sermons or stream online at the following links: