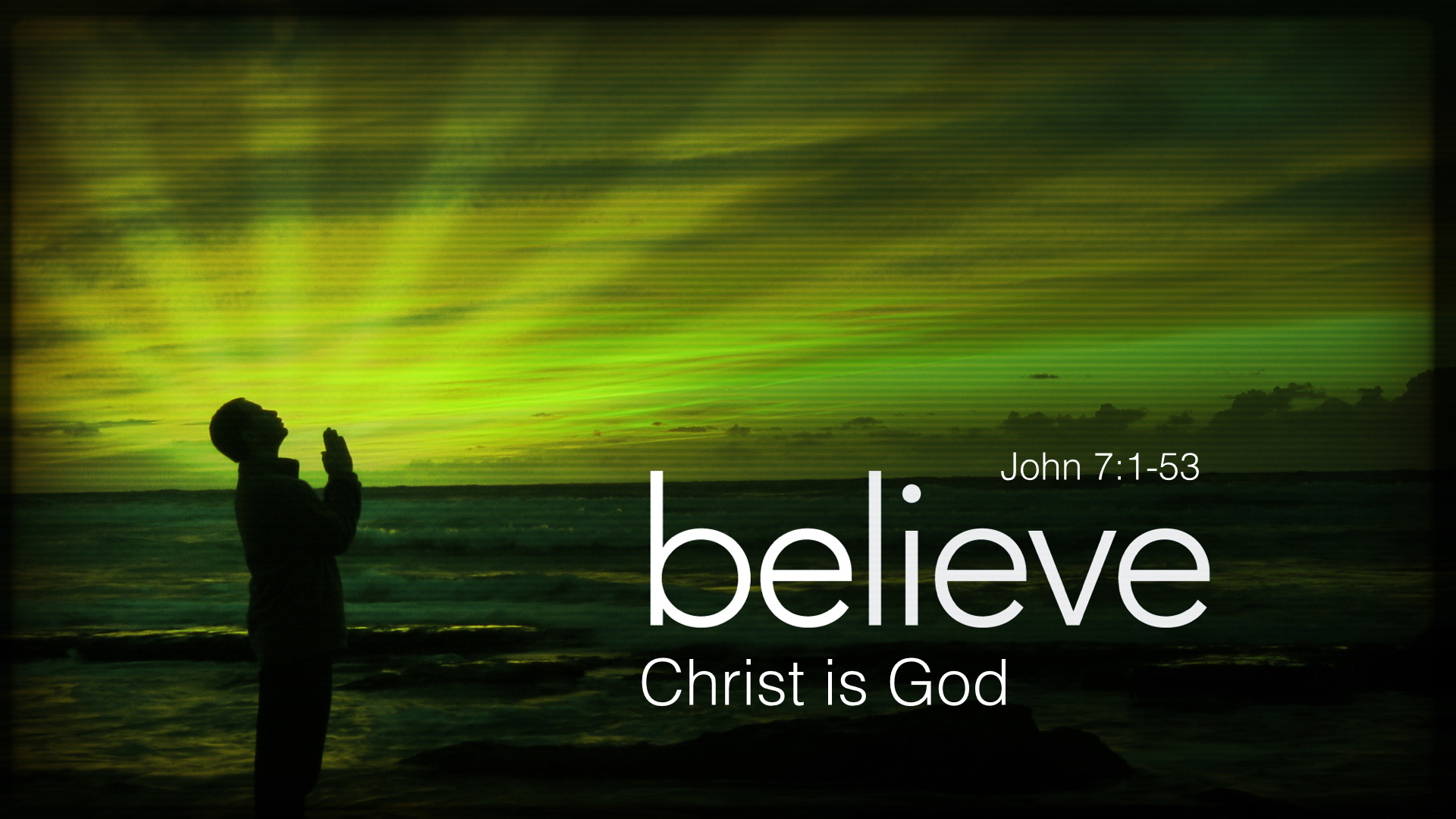 In John chapter 7 John submits evidence again that Christ is God by showing the connection between Christ and God’s plan, God’s message, God’s work, and God’s answer to man’s need.

Our stage for the scene recorded in John 7 is Jerusalem. Six months have passed since Jesus multiplied the little boy’s lunch and fed the 5000. It is the Feast of Tabernacles, a celebration that all Jewish males were required to keep.

As we read this chapter it is clear that a major theme is the efforts of the Jewish leaders to kill Jesus.  They were not successful at this time and I believe that one reason John records these events in chapter seven is to show that when Christ did enter Jerusalem to die in chapter 12, it was an intentional act on Christ’s part.

God’s ways are not our ways.

It made logical sense to the brothers to encourage Christ to get more exposure. They thought Christ was trying to expand His influence, though they did not believe His message. They missed Christ’s overall purpose: to redeem man from sin.

No matter what the world said, no matter what family said, Christ put God and His plan above all of that. We must do the same.

The Jewish leaders were waiting to arrest Christ but could not find Him. The people reacted as they believed, though they feared the leaders (11-12).

Christ openly taught in the temple (14-16). Fear did not control Christ’s agenda.  One might think that Christ was afraid of the Jews because He did not travel with His family. His reason for not traveling with His family was that He was following God’s plan not conforming to the expectations of others.

Desire determines understanding, “If anyone wills to do His will, he shall know concerning the doctrine” (17).

Jewish doctrine was careful to make sure that no one used their own authority. Though Christ could have used His own authority, being God, He pointed back to His Father that the people claimed to believe in.

Self-seeking discredits the message (18-19).  The Jews were silent at this rebuke, in fact they do not speak to Christ again in this chapter.

He speaks to the people to remind them of why the Jewish leaders wanted to kill him: the healing of the lame man in chapter 5.

He clarifies the issue for people who are afraid of the Jewish leaders – vs. 13

The people confused the truth with tradition. The tradition was that the Messiah would appear and no one would know where He came from. The truth in the Scriptures was much different.

He declared again He was coming on behalf of God.  We don’t know what it looked like when people tried to take Him and could not, but the people could not touch Him because He was in control – He is God.

Some believe because they saw the significance of the signs. Finally someone is thinking and realize that the signs point to the origin of the power.

When the Jews sent people to arrest Jesus, He responds to those attempting to take Him (33-34),  Christ was to die about six months later, but this was not God’s time.  There is an indication from John that there will be a time when those who refused to believe will be looking for him but they won’t be able to find Him, they cannot get to Him.

On the last day, that great day of the feast, Jesus stood and cried out, saying, “If anyone thirsts, let him come to Me and drink. (John 7:37)

“Ho! Everyone who thirsts, Come to the waters; And you who have no money, Come, buy and eat. Yes, come, buy wine and milk Without money and without price. (Isaiah 55:1)

“In that day a fountain shall be opened for the house of David and for the inhabitants of Jerusalem, for sin and for uncleanness.” (Zechariah 13:1)

“He who believes in Me, as the Scripture has said, out of his heart will flow rivers of living water.”  But this He spoke concerning the Spirit, whom those believing in Him would receive; for the Holy Spirit was not yet given, because Jesus was not yet glorified. Therefore many from the crowd, when they heard this saying, said, “Truly this is the Prophet.” (John 7:38-40 )

Some had come to the wrong conclusion (40)

Some had embraced the truth (41)

Some were distracted from the truth by wrong information (41)

Which one of these categories do you fall into?

Then the officers came to the chief priests and Pharisees, who said to them, “Why have you not brought Him?”  The officers answered, “No man ever spoke like this Man!”  Then the Pharisees answered them, “Are you also deceived?  Have any of the rulers or the Pharisees believed in Him?  But this crowd that does not know the law is accursed.” (John 7:45-49)

The pride of the Pharisees kept them from believing (47-49)

Anyone speaking the truth was also rejected (50-53)

Christ works out God’s plan, He speaks God’s message, He does God’s work, He is God’s Answer, all because Jesus Christ is God! Believing in Him gives eternal life. (Jn. 20:31)