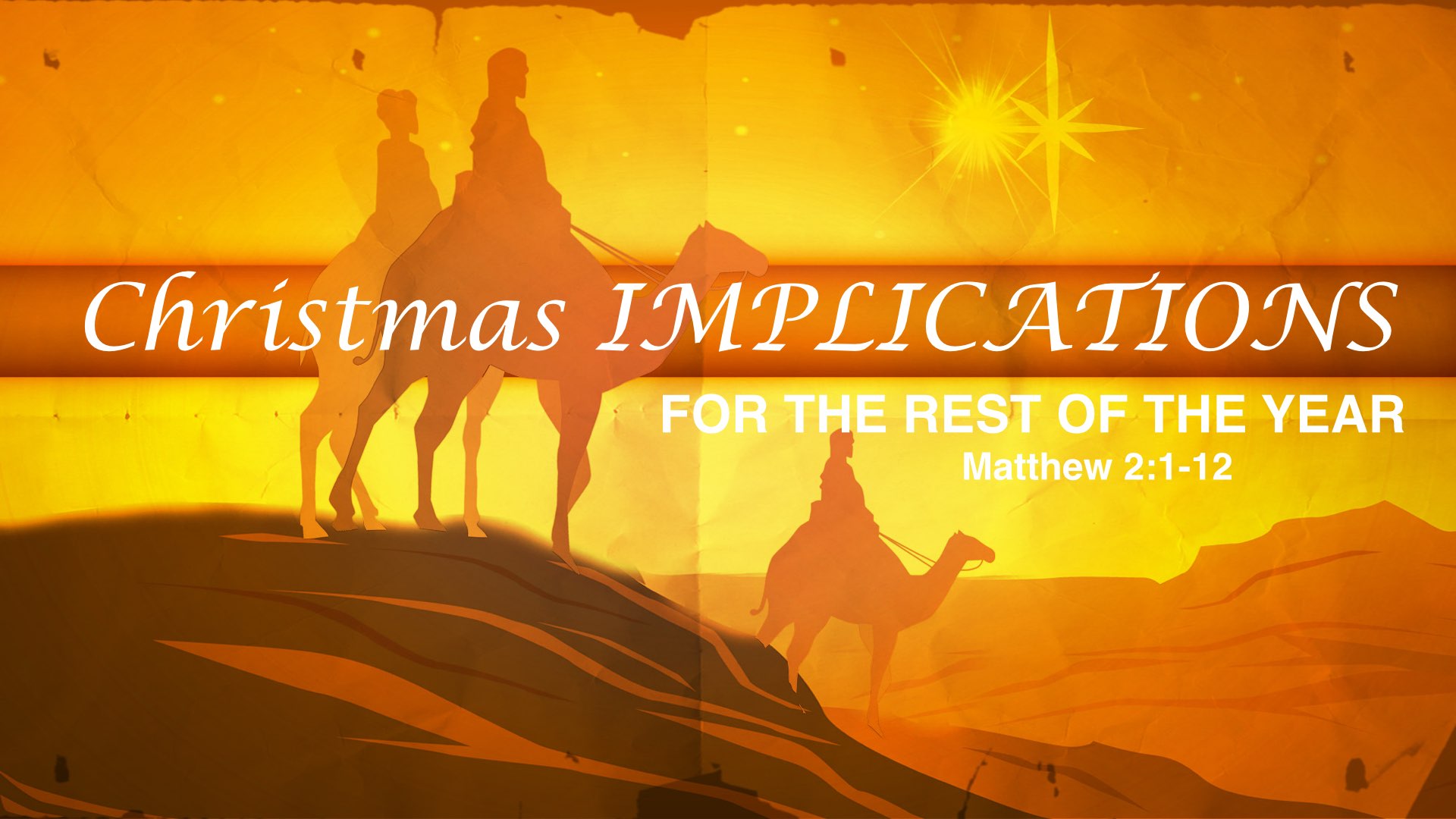 We have spent precious time with family and friends.  The gifts have been opened, the meals have been prepared and consumed.

Christmas is over, now what?

The first twelve verses of Matthew chapter two provide two soul-searching implications for the rest of the year!

As you read these verses – and I hope you will pause right now to read them – there is a word that you can’t miss – worship.  Early in the text the Wise Men arrive in Jerusalem and announce that they have come to worship the newborn King.  Herod secretly call them aside with instructions to find the King and call him so he too can come and worship.  Finally we see the Wise Men enter the house with joy and fall down to worship.

Someone has said, “All men worship someone, if only themselves.”  In the final analysis, the acid test of wisdom and foolishness is how a person responds to Jesus Christ.

These wise men were the outsiders! They were Gentiles from the East – region of Persia and perhaps from the city of Babylon itself.

There are many Christmas traditions surrounding these men.   The Wise Men are always pictured as being three in number – we know there were three gifts given to Christ, but the text doesn’t tell us how many Wise Men there were.

We often see the Wise Men in the Nativity Scenes bowing with the shepherds at the manger. Our text makes it clear that Jesus was a small child by the time the Wise Men visited under the age of two, but no longer a newborn baby, and verse 11 tells us that they entered the house of Joseph and Mary in order to worship him.

We sing the familiar Christmas Carol “We Three Kings”, but these men were not kings.  They were astronomers, scientists of their day who practiced the ancient art of Astrology.  They were wealthy, well respected in society and highly educated… but they were not royalty.

There are some important lessons we learn from these men however:

In Jeremiah 29:13 God told the nation of Israel:

They seek Him! (1)  They had to use their energy.  They were required to reason and make decisions.  God miraculously opens our minds to Christ – but He expects us to diligently seek Him if He is to be found by you!

They unashamedly acknowledge Him (2)

Rom 1:16 For I am not ashamed of the gospel of Christ, for it is the power of God to salvation for everyone who believes, for the Jew first and also for the Greek.

They know His true identity (2). He is born king… not born to be a king.

Phil. 2:9 Therefore God also has highly exalted Him and given Him the name which is above every name, 10 that at the name of Jesus every knee should bow, of those in heaven, and of those on earth, and of those under the earth, 11 and that every tongue should confess that Jesus Christ is Lord, to the glory of God the Father.

Ps. 95:6 Oh come, let us worship and bow down; Let us kneel before the LORD our Maker.

Worship involves the whole of our being!

Ro. 12:1 I beseech you therefore, brethren, by the mercies of God, that you present your bodies a living sacrifice, holy, acceptable to God, which is your reasonable service. 2 And do not be conformed to this world, but be transformed by the renewing of your mind, that you may prove what is that good and acceptable and perfect will of God.

They brought valuable gifts.  Christian tradition suggests that gold was given to because he was royalty.  Frankincense was given and pointed to His Deity.  Myrrh was a common spice used to anent a dead body prior to wrapping it in death cloths, therefore the gift of Myrrh points to His suffering and death.  Whether this is what the Wise Men had in mind when they gave these gifts we don’t know, but we do know that each of these gifts was extremely costly.

They also offered unfaltering obedience. They departed another way as per instructions (12).

Note the order that this story unfolds: First they seek for Jesus, they find Him, they worship Him, and they obey Him.

So what have you brought to Jesus this Christmas? As we head into a new year, what will you offer Him?  You may not have gold, frankincense or myrrh, but you can give him priority in your time, your talents, and your treasures.

What has God said to you that you have determined by His grace that you will obey? In John 14:15 we are reminded that “if you love me, keep my commandments.”  What are some of the commands that God has revealed to you so far this year?

First He commands you to believe & receive His Son.

Acts 16:31 So they said, “Believe on the Lord Jesus Christ, and you will be saved, you and your household.”

He commands those who believe in Jesus to publicly identify themselves as His followers through believer’s baptism.

Acts 2:41 Then those who gladly received his word were baptized; and that day about three thousand souls were added to them. (See also Acts 8:12, Matthew 28:18-20)

God commands His children to be committed to a local church.

Acts 2:47 praising God and having favor with all the people. And the Lord added to the church daily those who were being saved.

Mt. 6:33 seek first the kingdom of God and His righteousness and all these things will be added unto you.

Warren Wiersbe suggest that the Wise Men provide us three lessons for finding God’s will:

The Implication we draw from visiting with the Wise Men in this text is that Wise Men & Women acknowledge Jesus Christ and worship Him!

Apathy is a self-satisfied state of indifference. This is the “whatever” attitude.

Bethlehem was only 8km from Jerusalem! This is the distance our orphan children from Faith Children’s Village travel to secondary school everyday.  Anyone could walk this distance with ease and yet these religious men were indifferent to the news of the newly born King.

These were religious fools, these high priests and scribes. They knew about Messiah in their head, They even knew the Scriptures that prophesied where He would be born, but they did not believe it in their heart.

2 Cor. 13:5 Examine yourselves as to whether you are in the faith. Test yourselves.

Never forget this reality: You LIVE what you BELIEVE!

These religious Insiders were indifferent to this new King.  Indifference to God is simply hatred that is concealed and rejection that is delayed.

Prov 1:32 And the complacency of fools will destroy them;

By the time the Wise Men arrived in Jerusalem it is likely that Herod was sick.  He would soon die at the age of 70.

Herod was a wicked and hated Edomite king.  In fact five days before he died he killed his own son and ordered that all the leaders of the Jews assemble at his palace and then he incarcerated them. He issued an order was that when he died these Jewish leaders were to be executed so that the Jews would weep instead of rejoice at the news of his death.

King Herod saw Christ as a threat to his ambitions, to his dreams, his position, and his power so he tried to eliminate him. Herod secretly called the wise men to assure them that he too wanted to worship this newly born King of the Jews – Devious, pretense. He would call for the execution of all baby boys in the region from 2yrs old and under. (see v16)

Perhaps you are like the Priests and Scribes – you too are a religious Insider.  You have grown up in the church, you have attended Sunday School, you enrolled in Religious Education, you may have been baptized.  You know about God and the Bible but you like them are apathetic!  Be warned!  There is coming a day of judgement, listen to what Jesus said to the religious Insiders in Matthew 7:22-23:  “depart from me, I never knew you!”

Or perhaps you are like Herod – you are positioned and powerful.  You are a high-stakes man or woman, a mover and a shaker in society.  People know you, fear you, admire you!  To you Christ’s demands are a threat to your agenda, to your dreams to your position and power.  There was a man like this in Luke 16:19-31 who died.  In hell he was in torment and cried out for someone to go to his five surviving brothers to warn them not to come to such an awful place.  Abraham answered “they have Moses and the Prophets let them hear them.”

Here is the bottom line: everybody makes individual decisions about what they will do with Christ after Christmas: The Outsiders, The Insiders, and The Placed & Powerful.

Jesus gives us an insider glimpse of how it ends for Wise Men and for Foolish Men:

The house symbolizes our lives.  The rain, wind and flood is the judgement that is coming.

The Wise Man builds His life upon the rock, the Lord Jesus Christ.  When the wind and rain and flood of judgement comes His life stands firm.

But not so with the foolish man.  You see He has built his life on the sands of his own desires and human wisdom.  When the storm of judgment comes everything he has worked for, invested in – his life is destroyed.  He has nothing to show for all his life efforts.

None of us want to be numbered with the foolish this Christmas! Be a Wise Man, be a Wise Woman – search for Jesus, find Him, worship Him and obey Him!  Build your life this coming year on the Rock – the Lord Jesus Christ!