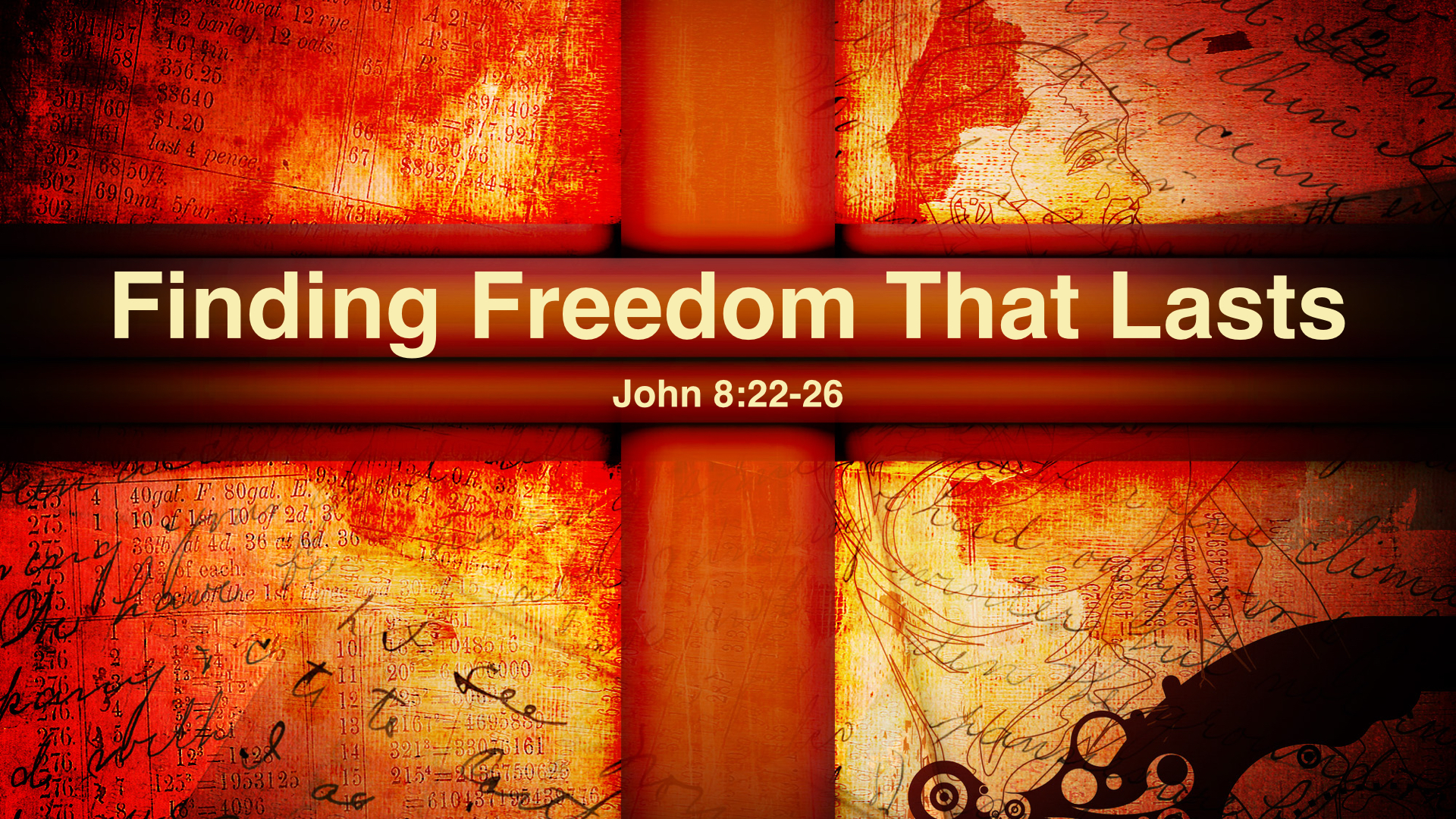 Have you ever felt trapped?  Perhaps you reached a low point in a particular inner spiritual struggle where you said to yourself:  “I’m tired of reacting/saying/thinking/doing _______ and I’m going to make a change in my life!”  But before you knew it, you were repeating the same cycle all over again!

If Satan can get you to believe a lie, He can control your life!

We all are translating the events and circumstances of our lives through a particular worldview. Worldview is “the overall perspective from which one sees and interprets the world.” (http://www.thefreedictionary.com/worldview)

During the 17th & 18th centuries the western world lived through a period known as the Enlightenment.  The belief was that man could formulate through science and advanced knowledge a world where there was no human ills!  It was a time of great hope, great scientific achievements. There was a firm belief in the supernatural. This ideal was shattered by two world wars.

During the 19th and early 20th century the philosophical view in the west became modernism. Modernism is a relevant, practical, measurable world that is understood through science and the physical senses. Modernism was largely secular and rejected the supernatural.

Western worldview has moved from Modernism and its anti-supernatural bias, to Post-Modernism which acknowledges the spiritual but says that there is no absolute truth. If it feels good, if it feels right to you and you are not hurting anyone, then go ahead! Truth is determined by each individual in the context of their own culture, truth is relative.  In fact for the post-modernist the noblest virtue is tolerance of other views, and the greatest (and only) sin is to be intolerant of others. To insist that objective truth exists… truth that is for every age, generation and culture is intolerant and cannot be tolerated!

It is no wonder that men and women are in bondage! Truth brings spiritual freedom! And that is exactly what is happening in our text today!

To those who believed in Him Jesus said, “You will know the truth and the truth will set you free!”

These people are religious, they accept the notion of God… but they want God on their own terms, according to their own ideas and conceptions and thus they need to be delivered from the bondage that they are were under.

If we are to find freedom that lasts:

You will die in your sins:

If you trust in your own self-righteous (22) – The Jews

Rom. 1:1-4 Brethren, my heart’s desire and prayer to God for Israel is that they may be saved. 2 For I bear them witness that they have a zeal for God, but not according to knowledge. 3 For they being ignorant of God’s righteousness, and seeking to establish their own righteousness, have not submitted to the righteousness of God. 4 For Christ is the end of the law for righteousness to everyone who believes.

Titus 3:5 not by works of righteousness which we have done, but according to His mercy He saved us, through the washing of regeneration and renewing of the Holy Spirit,

Ps. 14:2-3 The Lord looks down from heaven upon the children of men,To see if there are any who understand, who seek God. 3 They have all turned aside,They have together become corrupt; There is none who does good, No, not one.

Be part of this world system that is diametrically opposed to God and Christ.  Jesus is not part of this system.  He is from above!

1 John 5:19 We know that we are of God, and the whole world lies under the sway of the wicked one.

If you are unbelieving (24)

Those who do not believe that Jesus is God will die in their sins.  Sin will destroy us only if we refuse to believe in Jesus! There is no sin that you have committed that Jesus cannot and will not freely and fully forgive. Only God can forgive sins!

Dr Gordan Alles was a brilliant American chemist who pioneered the development of insulin as a treatment for diabetes. In January 1963 after returning from a trip to Tahiti, died. He was 62. The reason for his sudden death? Diabetes. Insulin could have saved his life, but no matter how effective a cure may be, it is of benefit only if there is diagnosis and treatment. (http://en.wikipedia.org/wiki/Gordon_Alles)

Jesus had been performing amazing, undeniable miracles, he repeatedly claimed to be Messiah!

Their ignorance was inexcusable. It was not that the evidence was not on the table, it is that they did not want to acknowledge it because of the implications to their own lives, priorities and agendas.

In reality they were trapped!  They embraced self-righteousness, they were firmly rooted in the world and thus they did not believe, they willfully ignored what others clearly saw! Why? Because they were in reality slaves to something… to someone…

Jesus now offers them a way out!

You and I can escape the dreadful and just consequences of sin and unbelief… here is how:

Believe in Jesus Christ (31a)

“If” – it is possible to claim to believe and yet not be His disciple. A disciple is a follower, one who is a learner through relationship.  In earlier generations it was the idea of becoming an apprentice of a master craftsman, a relationship in which the apprentice observed, listened, learned and practiced the skill until he himself became a master-craftsman.

You cannot be a true disciple unless you have placed saving faith in Jesus Christ!

When you become a true disciple you don’t only claim to believe in Him, you also abide (remain) in His Word. To believe in Jesus is to obey Jesus.  You cannot separate the two.  You do not truly believe savingly if you do not have a heart to obey Him.

Mt. 12:50 For whoever does the will of My Father in heaven is My brother and sister and mother.”

1 John 2:4-64 He who says, “I know Him,” and does not keep His commandments, is a liar, and the truth is not in him. But whoever keeps His word, truly the love of God is perfected in him. By this we know that we are in Him. He who says he abides in Him ought himself also to walk just as He walked.

True disciples are Word-oriented. They desire the “pure milk of the Word” like little babies who crave milk.  It is through the Word alone that we will grow as His children.  It is not through seminars, books, uplifting talks, psychological analysis, or any other means!  There is one way that a disciple grows from from infancy into to a strong, reproducing adult – the Word of God! (Jas 1:22)

1 Peter 2:22 as newborn babes, desire the pure milk of the word, that you may grow thereby,

The post-modernists of our day are left with nothing but their own ignorance – the search for truth is futile apart from God.

Scripture is God’s revelation of Divine truth. It is the Word of Truth that we abide in as His disciples that set us free!

2 Tim. 3:16-17 All Scripture is given by inspiration of God, and is profitable for doctrine, for reproof, for correction, for instruction in righteousness, that the man of God may be complete, thoroughly equipped for every good work.

In Scripture Jesus is revealed as truth in the flesh (14:6). As a result of knowing Jesus Christ you can differentiate and and sort through all the voices claiming truth. You can know the truth and once you know truth you will be free! (Jn. 1:7)

Through Scripture the Holy Spirit teaches truth to believers. (Jn 17:17)  This is the ongoing work of the Spirit of God to teach and affirm the truth of the Word of God to the hearts of those who have been saved by faith!

Luke 4:18 “The Spirit of the Lord is upon Me, Because He has anointed Me To preach the gospel to the poor; He has sent Me to heal the brokenhearted, To proclaim liberty to the captives And recovery of sight to the blind, To set at liberty those who are oppressed;

Gal. 5:1 Stand fast therefore in the liberty by which Christ has made us free, and do not be entangled again with a yoke of bondage.

Free from the bondage to the lie – Satan doesn’t care what lie you believe as long as you don’t embrace the truth. Choose whatever worldview suits you. Spend your life in mad pursuit of pleasure, or knowledge, or achievement, or whatever. Want religion – no problem, there are plenty to choose from and Satan is happy for whichever one you want to choose to believe! There is only one that he wants to keep you from at all costs – the truth of salvation through faith in Jesus Christ.

Free from bondage to sin – sin is like a sweet tasting poison, it swallows so smoothly but once consumed it rots everything it touches – from the inside out.

SIGNS THAT THEY DESPERATELY NEEDED THIS FREEDOM (33-34)

They denied that they were in bondage.  We have never been in bondage to anyone, how can you say that you shall be made free?  How blind we can be to clear realities!

Perhaps they were speaking spiritually because they had been enslaved in Egypt, Assyria, Babylon, Medio-Persia, Greece, Syria and now Rome!

They were confident that they were spiritually free because they were descendants of Abraham. Freedom doesn’t come from family, religious or racial backgrounds! (Ro. 2:28-29).

They were in bondage but blind to that reality! The same with us!

To deny that we have a problem, that we are enslaved to a particular sin is to remain in bondage to that sin!  We must acknowledge the truth – only then can we seek the solution.

The deceived must be confronted with their condition: “Most assuredly” is code for – “This is VERY IMPORTANT – listen carefully!”

They thought they were free, but were actually in bondage.  They were a slave of sin.  To be a slave is to be under the control of another and unable to free oneself.

This sin is binding, a continual, habitual pattern of life (Commits Sin). Like a cruel taskmaster sin controls every aspect of a persons life. The person is enslaved to various lusts and passions (Titus 3:3). He is not here speaking of any one particular act. (2 Pt. 2:19)

Titus 3:3-6 For we ourselves were also once foolish, disobedient, deceived, serving various lusts and pleasures, living in malice and envy, hateful and hating one another. 4 But when the kindness and the love of God our Savior toward man appeared, 5 not by works of righteousness which we have done, but according to His mercy He saved us, through the washing of regeneration and renewing of the Holy Spirit, 6 whom He poured out on us abundantly through Jesus Christ our Savior,

They had believed the lie! They needed to embrace liberating truth! We must face the painful reality / face the truth about ourselves if we are to be free!

You may say that a particular thing does not enslave you… try stopping!  How long can you go without becoming intoxicated or being controlled by lustful thoughts or giving in to an outburst of anger?

Friends we are all in this same boat together – the Bible is clear that we all do battle with sin, because we are sinners!

There is hope! You can be set free today! If Jesus sets you free – you are really free!

Believe in Jesus Christ today – accept Him as your Savior right now!  Open your heart and invite Him to replace your sin with His presence and forgiveness.

Now commit to reading, studying and joining in corporate fellowship around the Word of God.  You will spend a lifetime plumbing the depths of God’s glorious liberating truth!

Download a free .pdf copy of Finding Freedom That Lasts.