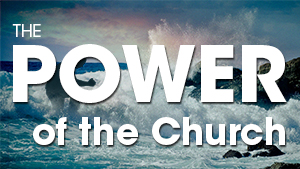 I remember when my wife was nearing the end of her pregnancy with our second child.  The closer the time came to deliver the busier and more active she got.  She was busy cleaning the floors, dusting the housing, scrubbing the bathroom.  She had this urge to clean the house.  They call this the nesting stage.  Rather than taking it easy while waiting for the baby to come, my wife was working while waiting.  Sure enough, within a few days the baby had arrived.

Big Idea:  A powerful church works for the Lord while waiting for Him to fulfill His promises.

As we are in the early stages of Kitwe Church’s development I am torn between how to present this material.  Although I love preaching, I think what we need most at this stage in Kitwe Church is clear teaching because there is so much confusion about how the church should conduct itself.

As I have mentioned before, the book of Acts presents us with the church in a transitional phase.  Although we can learn a lot from the principles of the early church, many of the things described in Acts are not prescribed as normal for us today.  It is my goal to help us sort through what was described in Acts and help us determine what was unique to the early church prior to the completion of the Bible and what is supposed to be normal even in how we operate today.

a. What leaders were being chosen?

Note:  These were the original Apostles.  There are no “Apostles” today, but the principles of choosing leaders can still be applied.

2) Had to have been a disciple of Jesus from the point of John’s Baptism to Jesus’ ascension.

3) Had to be a witness of the resurrected Jesus.

b. How did the early church go about choosing?

i. Someone from within the group vs 21

ii. Someone who had been with the resurrected Christ vs. 21

iii. Someone with godly character v. 23

iv. They didn’t know whom to choose, but these criteria certainly helped know who was not even eligible to be chosen.

i. We can’t trust our human wisdom, we need God’s wisdom.

ii. We see the personality and the ability of people, but God knows the heart.

iii. Never make any decision about Kitwe Church without first bathing it in prayer!

2. A Powerful Church is Indwelt by the Holy Spirit:  The Wait Comes to and End – the Promised Power Arrives

Timing is a very important aspect of missions and church planting.  God made precision plans to introduce the church to the community on a day of significance so that there would be powerfully symbolic images to go with the identity and message of the church.

One important thing must be noted.  God chose the day.  It did not depend on any activities of the Christians.  He did not come when he came because they prayed Him in to coming.  As God, He is sovereign.  He chooses everything.  Men can’t manipulate His plan or timing.

A. The Holiday – Pentecost

The term “Pentecost” comes from the Greek pentekostos,which literally means 50th because this day was exactly 50 days after Passover.  Pentecost is the New Testament name for the Feast of Weeks (Exodus 34:22-23), or Harvest (Exodus 23:16), which was celebrated fifty days after Passover.

• So, let’s put this into terms that we can all understand.  Jesus was arrested on the night of the Passover and illegally tried in court.  He was killed by crucifixion the next day and then rose again three days later (Sunday).

• If we put that into our current day, the Passover would have been on March 24, Holy Thursday.

• Jesus would have been killed on March 25, Good Friday.

• Pentecost would be May 13.  Imagine waiting that long in Jerusalem before the promised Holy Spirit would come.

• But, there was great significance behind the waiting for this day.

This particular holiday took on even more significant meaning after the Jewish people returned from their years of exile in Assyria, Babylon, and Persia.  At this time Judaism began celebrating the giving of the Law to Moses at Pentecost also.

There is great redemptive significance in all of the Jewish Feasts.

God’s redemptive New Testament timetable is pictured in the feasts of Leviticus 23.  The first great feast mentioned in that chapter is Passover.

–The killing of the Passover lamb pictures the death of Jesus Christ, the ultimate Passover Lamb (1 Cor. 5:7).

– A second feast was the feast of Unleavened Bread, celebrated on the day after Passover.  During that feast, an offering of the first fruits of the grain harvest was made.

– Fifty days after the first Sunday following Passover, the Feast of Pentecost was celebrated (Lev. 23:15ff) At Pentecost, another offering of first fruits was made (Lev. 23:20).

– God sent the Spirit on Pentecost, then, following the pattern of Leviticus 23, not in response to any activity of men.

So, timing is important.  We prayed and asked God to reveal the timing for the start of Kitwe church also.  Did you notice the careful timing chosen for starting of Kitwe Church – Easter?

B. The Holy Spirit

Although they knew that the Spirit’s coming was imminent (cf 1:5), they were still caught by surprise when He came.

2. There was a sound like a violent rushing wind.

3. Spirit’s presence filled only the whole house where the believers were sitting.

Although the sound of the heavenly wind may have attracted the crowd that soon gathered, the Spirit’s presence filled only the believers inside the house.

4. Tongues of Fire rested upon each one of them.

“It was a uniform, sovereign work of God on all collectively, not something sought individually.  At this point, the baptism with the spirit, they were all made into one spiritual body – the body of Christ.”

5. One external evidence of being baptized with the spirit was the ability to speak in languages that they had never studied, understood, or spoken before.

The Apostle Peter who …..

Rebuked Jesus when Jesus revealed to the disciples that he would be crucified.  Peter said, “Far be it from you Lord.  This shall never happen to you.”  Jesus responded, “Get behind me Satan! You are a hindrance to me, For you are not setting your mind on the things of God, but on the things of man.” Matthew 16: 21-24

Jesus is the disciple who refused to let Jesus wash his feet until Jesus said, then you have no part with me.  Then Peter said, then don’t stop with just my feet.  Wash my entire body because I want to be one of your followers.

The same Peter who said that  he would die before he ever denied beinga follower of Christ and then denied Christ 3 times before the rooster crowed.  Peter felt such shame that he rushed out and wept bitterly.

The same Peter felt like such a failure that even after seeing the resurrected Jesus decided to go back to his old life of being a fishermen.  He was not going to be a preacher or an apostle.  He wanted to close that chapter of his life.  The only thing that made him reconsider was a personal visit from Jesus where Jesus asked him three times, “Peter, do you love me.”  When Peter said yes, the Jesus said, “Then feed my sheep.”  Jesus was saying, “I have called you and equipped you to be an apostle and a preacher.  Don’t go back to fishing.  Stay dedicated to me and your calling.  John 21:3, 15-19

Peter experienced humiliating failures and was tempted to quit forever, but now God reveals that he delights to use the weak and foolish to do His work (1 Cor. 1:26-31).

• They devoted themselves to the Apostles teaching (they had church services like this one where they were getting their understanding clear and correcting misunderstandings from previous religious traditions.

• Loved each other sacrificially.

• They continued sharing the gospel so that every day people were getting saved.

Today we have once again looked at the early church from 33 AD to learn truths for us to apply in 2016 AD.  We have seen that a powerful church works for the Lord while waiting for Him to fulfill His promises.

Well, the Lord has promised that He will return to take His church home.  What should Kitwe Church do while waiting for the Lord to return?

2. Be Filled with the Holy Spirit

3. Flee false teaching no matter how popular the teaching may be in modern culture.

4. Be witnesses and serve God, like Peter, no matter how you may have failed in the past.

5. Let God use you to impact others however He sees fit.