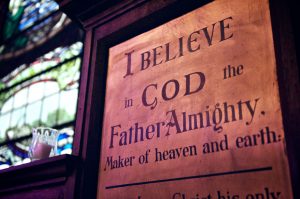 Are Freemasonry and Christianity compatible? This is a question we are asked often at Kitwe Church. When searching out questions of this nature, it is important that Christians remember that Scripture is our source for faith (what we believe) and practice (what we do).

So is the teaching of Freemasonry compatible with Christianity and the teachings of Scripture?

Here is a sample of from a helpful comparison chart compiled by the North American Mission Board on the subject of God.  (The entire chart is available for free download at the link below.)  What does Freemasonry teach, what does Christianity teach, what does the Bible say?

Offensive terms such as ‘Jah-Bul-On,’ the so-called secret name of God, are used. Masonic writer Albert Pike, in his Book of the Words, explained the first two sylla- bles of the secret name in his discussion of the old French rituals: “This is probably Jabulum, incorrectly copied; which, as I have shown, meant ‘the product of, that which proceeded, issued or emanated from Om.’ If correctly written, it is compounded of . . . Yu or Yah-u . . . Baal or Bal or Bel, and Om, thus combining the names of the Hebrew, Phoenician and Hindu Deities, to indicate that they are in reality the same. In some old rituals it is Jabulum.” 1

Exodus 20:4: You shall not make for yourself an idol in the form of anything in heaven above or on the earth beneath or in the waters below. Deuteronomy 7:25: The images of their gods you are to burn in the fire.
Deuteronomy 11:16: Be careful, or you will be enticed to turn away and worship other gods and bow down to them.
Psalms 81:9: You shall have no foreign god among you; you shall not bow down to an alien god.
Isaiah 42:8: I am the Lord; that is my name! I will not give my glory to another or my praise to idols. 1 John 5:21: Dear children, keep yourselves from idols.

Clearly the teaching of Freemasonry does not line up with the teachings of Scripture. A discerning Christian will see the falsehood and embrace the truth.