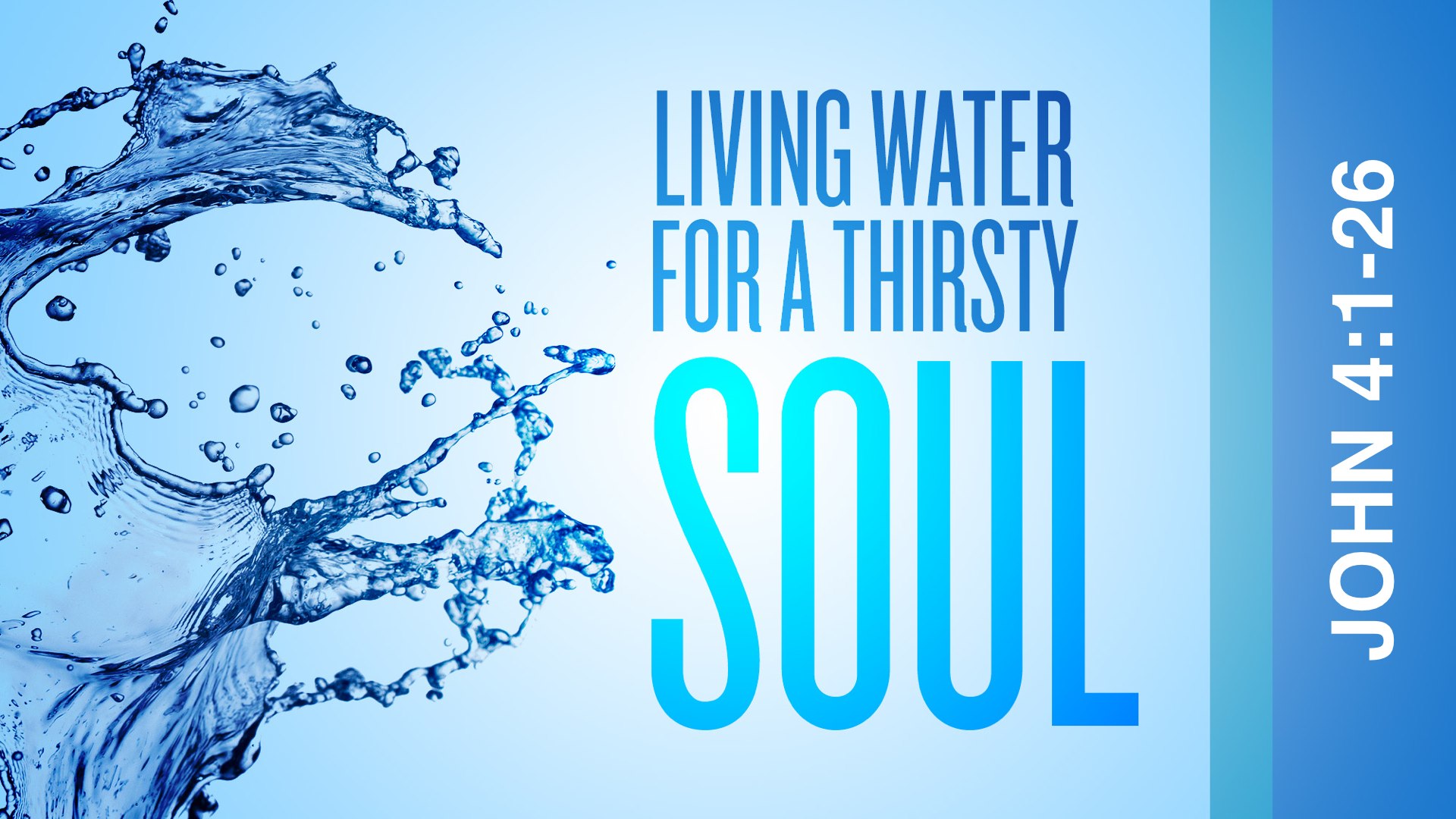 Thirst is deep craving of the body for fluids. People dying of thirst have been known to drink saltwater from the sea knowing it would kill them so powerful is the intense craving for water!

Because of the powerful imagery “thirst” is used often as a metaphor in the English language. Thirst has come to mean an ardent desire for something.   Someone might say, “He has a thirst for knowledge” or “that was a Blood-thirsty mob”.  This a kind of thirst drives a man or woman to do anything it takes to quench it!

Scripture also uses thirst to describe for intense craving. In the Sermon on the Mount Jesus said, “Blessed are those who Hunger and thirst after righteousness…” (Mt 5:6)

The Psalmist describes his intense longing for God with these words:

Psalm 63:1 O God, You are my God;
Early will I seek You;
My soul thirsts for You;
My flesh longs for You
In a dry and thirsty land
Where there is no water.

Our text today is found in John 4:1-26.  In the first four verses John informs us of what is taking place.

In an effort to avoid impending controversy with the Pharisees, Jesus left Judea in the south to return to Galilee (see map below) (v.1-3).  The distance from Jerusalem to Galilee was around 100km and required 2.5 days of walking through dry barren wilderness.

Note: Baptism is not a part of salvation! Baptismal Regeneration = the false teaching that baptism is necessary for salvation. Jesus did not baptize (2), yet he was clear that he had come to “seek and save those who are lost.” (Lk.19:10)

Jesus “needed to go through Samaria” (4). While traveling he stopped at noon near the city of Sychar at Jacob’s well. In his humanity Christ is hot and thirsty and tired.

The Jews and Samaritans hated each other. In 721 BC the Assyrians conquered the Northern Kingdom and carried many Jews away as captives. These Jewish people intermarried with the Assyrians (2 Kings 17:24-41) and eventually resettled in the land as a mixed race (Jew & Gentile).

In 587 BC Babylon took the Southern Kingdom into captivity. The Jewish people from the South did not intermarry in captivity. When these Jews finally returned to their homeland they refused to accept their kinsmen in the north (Ezra 4:1-3).

Samaritans accepted the first five books of Moses but rejected the rest of the Old Testament writings. They built their own temple on Mt. Gerazim mixing pagan idolatry with Jewish practices.

Josephus the Jewish Historian records that 20 years before Jesus, Samaritans had defiled the temple in Jerusalem by scattering human bones in the courtyard during Passover.

So great was the hatred that often Jewish people would cross over the Jordan River walk up past Samaria and then re-enter in Galilee (see map). Going through Samaria is a big deal – very uncomfortable for a Jewish Rabbi!

The Jews were rabidly prejudiced against the Samaritans. The Jewish Rabbi’s wrote: “Let no man eat the bread of the (Samaritans), for he who eats their bread is as he who eats swines’ flesh.” A popular Rabbinic prayer included this line: “And Lord, do not remember the Samaritans in the resurrection.”  In other words the Rabbi’s prayed for God to damn the Samaritans to hell!

When the Jews wanted to insult Jesus they drew upon the most degrading racial slur they could think of, they called him a Samaritan (John 8:48).

Jesus intentionally stepped outside the Jewish comfort zone because the gospel is for all people – even Samaritans! He intentionally went to people who had different beliefs and values because God had sent Him to the world!

Jesus spoke to her (7). This came as a shock to this woman from Samaria!  “How is that you, a Jew asks a drink from me, a Samaritan woman?”

Rabbis were forbidden to speak to a woman in public, even their wife.  One Rabbinical law states: “It is better to burn the law then give it to a woman.”

Jesus not only spoke to this woman, but he asked to drink from her vessel.  To touch her water pot was to become ceremonially defiled.

Jesus demonstrates what Paul would later write to the Galatians,

The gospel bridges all divides, it destroys all barriers: Slave & free, male & female, Jew & Greek.  In Christ we are all one!  Someone has said that the ground at the foot of the cross is level, everyone must kneel at the same place if they wish to be forgiven.

Wells in the ancient world was a social gathering place.  It was customary for people to come for water in the morning and in the evening… not at noon.   It seems this woman was intentionally avoiding contact with people. As we see in the following verses, this woman was a social outcast.

The Living Water Jesus is speaking of is the free offer of salvation given through the indwelling of God’s Holy Spirit. This internal fountain of “living water” would continually overflow to eternal life. (14b)

It seems like an abrupt change of conversation.  The woman has just asked Christ to go ahead and give her the living water He was offering.  Suddenly Jesus said, “Go call your husband.”

Jesus confronts her, not to condemn her, but to help her face the problem that was keeping her from having her “thirst” quenched eternally.

“I don’t have a husband,” she replied.  Her answer was accurate but incomplete – this woman and her situation was well-known in the town. (17)

This woman was empty inside!  There is a euphoria when you “fall in love” but that will fade and replacing it is a steadier, growing deeper kind of love, intended to last a lifetime. She was trying to satisfy the deep thirst and aching emptiness of her soul with the euphoria of love. She was ruining her life trying to satisfy her inner thirst for love and acceptance.

People today are like women from Samaria – they are trying to fill the deep longing inside with success or sex or stuff or drinking/drugs – whatever, yet coming up empty again and again.

“You know, I have slept with a lot of guys in the industry. But none of them helped me get my record deals. Which is annoying.”

Later in the article she indicates that she would like to die young:

Interviewer: Do what? Make Music?

“Everything. That’s just how I feel. If it wasn’t that way, then I wouldn’t say it. I would be scared if I knew [death] was coming, but …”

Jesus is saying to the woman from Samaria and Lana Del Ray and to you – the ONLY thing that will satisfy the thirst of your soul is the Living Water that I freely give! Seeking satisfaction from any other “well” will never satisfy your soul!

What is “worship”? The actions of men and women expressing homage to God because He is worthy of it! To bow down, to serve!

“It is entirely possible to have religious experience and forms of worship that are not at all acceptable to God.” (Tozer)

The NLT translates Romans 12:1 this way:

And so, dear brothers and sisters,* I plead with you to give your bodies to God because of all he has done for you. Let them be a living and holy sacrifice—the kind he will find acceptable. This is truly the way to worship him.

1 Corinthians 6:19-20 reminds us that the Holy Spirit lives in those who have received the living water:

Or do you not know that your body is the temple of the Holy Spirit who is in you, whom you have from God, and you are not your own? For you were bought at a price; therefore glorify God in your body and in your spirit, which are God’s

Her knowledge was incomplete (22)

Jesus pointed out that her understanding is mixed up with wrong ideas. The Samaritans had taken what they wanted from the Bible and rejected the rest. They added in a bit of idolatry and pagan practices.

The heresy of the Samaritans is alive today – people think they can pick out what they like to worship and reject what they do not like!

You cannot worship unless you have been born again – regeneration precedes worship. You must partake of the living water to be a true worshipper.

Worship must come from the heart (spirit). God is looking at our heart, not simply our religious routines. God wants to be the consuming attention of our heart!

Mark 7:6 He answered and said to them, “Well did Isaiah prophesy of you hypocrites, as it is written: ‘This people honors Me with their lips,But their heart is far from Me.

Worship must be guided by the truth.  It is possible to be sincere, but wrong!

For nearly 2000 years it was believed that bleeding an ill patient would help with a speedy recovery.  The process was known as “bloodletting.”  The first president of the United States, George Washington asked to be bled heavily after he developed a throat infection from weather exposure. It is recorded that over a ten hour period, a total of 3.75 liters of blood was withdrawn from the President leading to his death in 1799.

Being sincere is not enough!  We are to worship wholeheartedly guided by truth!  God is actively searching for worshippers who will worship Him in spirit & truth! (23b)

Jesus utters a life-altering revelation: “I who speak to you am He!” (26)   With these words Jesus clearly, unmistakably and undeniably identified himself as the Messiah!

She believed! The woman rushed off to tell everyone that she had found Messiah. So convincing was her testimony that the whole town came to meet Jesus, and ultimately all the Samaritans in Sychar believed in Him. (39,41).

Anybody, anywhere can come to Christ – anytime! Christ in love has intentionally “passed through Samaria” to find you!  That emptiness inside can be filled permanently – living water!  Christ in love is reaching out to you today.

If you are reading this Bible Study and you have that deep aching thirst in your soul – please receive Christ right now!  Drink of the Living Water that will satisfy your soul today and forever!

Click the highlighted link to download a pdf version of Living Water For A Thirsty Soul Web.