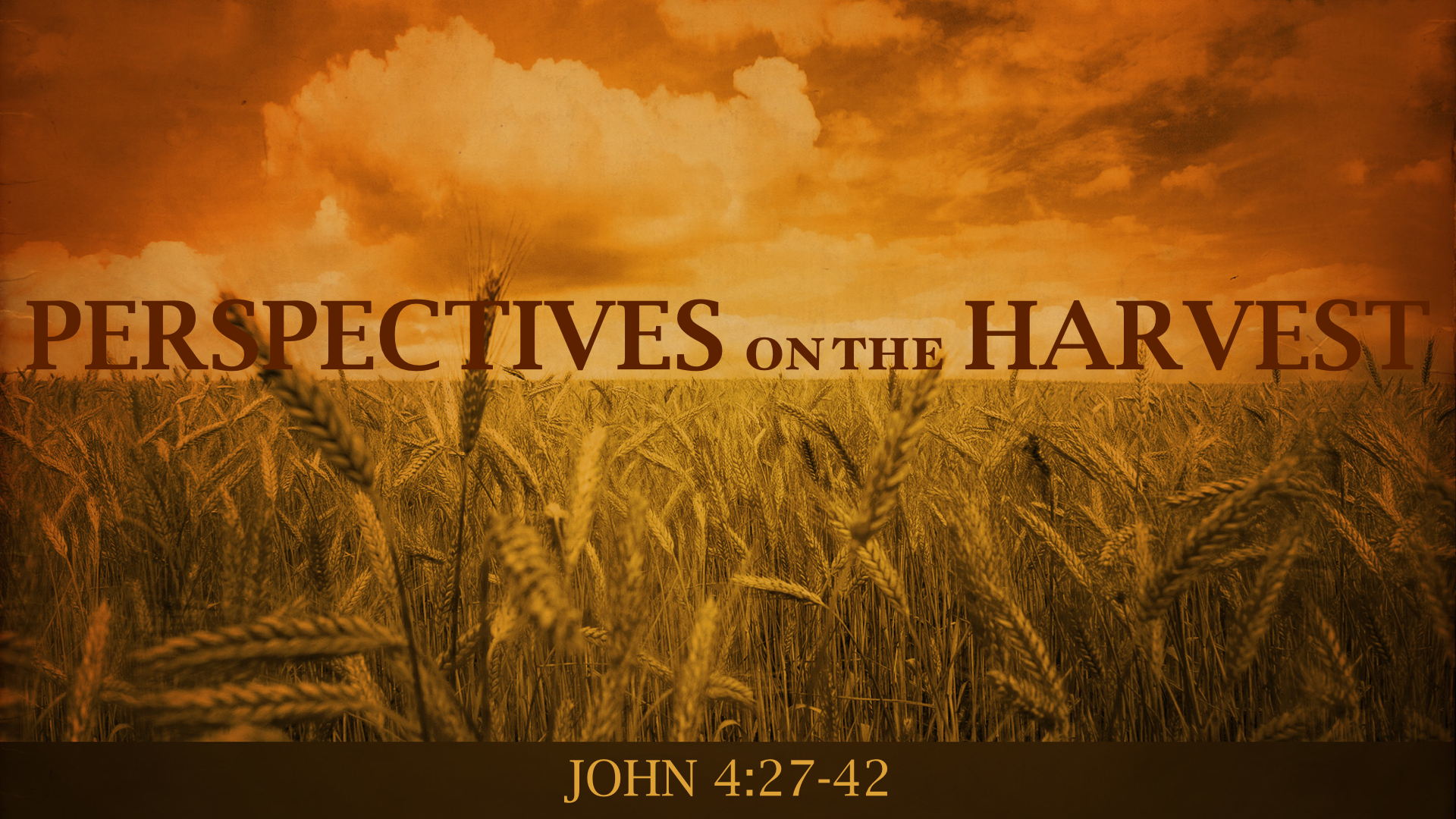 Our text today is John 4:27-42, but I would like to be sure we grasp the context of what we are looking at by beginning to read from verse 1.

Take a moment to watch this dramatized reading of John 4:1-27:

Jesus “needed to go through Samaria” (4) because there was a thirsty woman headed to a noontime God appointment at Jacob’s well. This woman of Samaria did not know about her appointment, but Christ did!

Whether you realize it or not, Jesus is on the same mission with you and me! He is headed toward a Divine appointment to offer you that same living water!

In verse 27 the disciples show up after a successful run to town for lunch. The are oblivious to what is taking place between Jesus and this woman. They are equally oblivious to the real needs around them.

The disciples were living it out on one level of reality – the physical. In that sense the disciples, though already followers of Jesus, are like the Samaritan woman! She is consumed up with life, and water pots and wells, and love and sex and… life. The disciples are caught up with life, and bread and Galilee travel plans and taking care of their Rabbi.

A. They were influenced by their culture (27)

“Marveled” – to be shocked! They were aware that a Jewish Rabbi was not permitted to speak to a woman in public, not even his wife or daughter. Add to this the hatred that existed between the Jews and Samaritans and you might understand the disciples reaction.

The Jews & Samaritans had a long history of hatred and mistrust for each other (9). When the Assyrians conquered the Northern Kingdom (721BC) they carried the Jews away as captives. These Jewish people intermarried with the Assyrians (2 Kings 17:24-41) and eventually repopulated what was known as Samaria. They embraced a religion that mixed pagan idolatrous practices with Jewish worship.

134 years later Babylon overthrew the Southern Kingdom and carried the people into captivity. These Jewish people did not intermarry with the Babylonians and preserving their worship of the true God of Israel.. When the Jews from the Southern Kingdom finally returned to their homeland they refused to accept their kinsmen in Samaria.

The disciples wondered among themselves but no one asked Jesus what he was doing, nor did they ask the woman, “what do you want?” (27) Perhaps they were realizing that Jesus could not be evaluated by cultural norms.

The disciples were focused on the physical food that they had gone to purchase in town. They urged Christ to eat! (31)

John 6:27 But don’t be so concerned about perishable things like food. Spend your energy seeking the eternal life that the Son of Man can give you…

When Jesus indicated that he had food to eat that they were not aware of, they began to ask themselves if someone had come to bring him food while they were away (33).

C.  They were influenced by their plans (3)

They were on a journey with Jesus to Galilee. There were travel plans to organize, food and lodging arrangements, trip estimates, travel time and a host of other administrative details.

They were so busy with the details of the trip that they were completely missing the purpose Christ was on earth and the reason for traveling through Samaria. When Jesus called them to follow Him, each disciple knew what that meant. They were going to be His apprentices, they were to follow Him, to learn from Him. Why had they so quickly forgotten the big purpose? When He called them, He did not hide the spiritual realities. “Follow me, and I will make you fishers of men,” Jesus told them (Mt. 4:19).

We too can be so caught up with our daily activities, providing for our own needs, carrying out our own plans that we rush past the people and miss God’s purpose for our lives!

A. Doing God’s work is what really satisfies (34)

Jesus had food that they didn’t know about. Doing the will of God was nourishment to his soul!

Each of us have at some point felt heart-throbbing exhilaration of doing something you are passionate about. That passion that makes you forget about other things, necessary things – like eating.

One of the things I enjoy very much is fishing. A few years ago I was invited to speak at a conference on the Island of Guam in the Pacific. The hosts asked what I would like to do while on island and I immediately told them of my love for fishing. They graciously hooked me up with a guy by the name of Sailor… to go out into the Pacific Ocean for a half day of fishing. The guy lived up to his name, we sped 20 miles of Guam and into some of the best fishing I’ve ever seen. We were hooking into Mahi Mahi, Tuna and Wahoo as quick as we could get the bait out. There is nothing as exhilarating as hearing the wine of fishing line screaming off the pole. We fished for most of the day and I didn’t eat a bite – I wasn’t hungry, didn’t even think about food the entire time… that’s what Jesus is saying here!

Where your passions lie is a good indicator of what your perspectives are. Jesus did not consider doing God’s will to be a burden or a distasteful thing… he found it to be satisfying!

The harvest is people! (35) The harvest is abundant, but laborers are few – why? They are not seeing it! In their prejudices and assumptions they lacked faith in the power of God. We often look at people as annoyances, projects, prospects but God sees them as people who He came to save.

I was recently on Safari in Chobe, Botswana with a good friend of mine. Steve is an avid birder. I like to see the “Big Five”, cats and crocs. We were driving along in the bush in our open safari vehicle when Steve excitedly said, “Look, look!” Standing only about 10 meters away was a huge elephant browsing on the leaves of a small tree. My friend continued to point and tell me to look. I realized that what he was looking at was not the elephant, but a small orange bird sitting above and to the left of the elephant, he had not even noticed the elephant right in front of us!

That is the way we can be in gospel work! We miss the “elephant” staring us in the face because we are focused on something else.

The harvest is shared – some sow others reap. The sower labors in anticipation of what is to come. The reaper must never forget that the harvest he enjoys is the fruit of someone else’s toil. We all have differing gifts and differing tasks but we share in the same harvest (36, 38). When participating in God’s harvest there will be eternal rewards. Paul called it the fruit that abounds to your account. (Phil. 4:17)

The harvest also results in unspeakable joy to both the sower and reaper. (36b) When one person repents, believes and receives salvation there is rejoicing in heaven! (Lk. 15:7)

One final thought before we move on, Jeus makes it clear that the Lord of the Harvest is the one who sends reapers into the field (38).

Matthew 9:37 Then He said to His disciples, “The harvest truly is plentiful, but the laborers are few. 38 Therefore pray the Lord of the harvest to send out laborers into His harvest.”

Her perspective changed about her task. She had come to the well to fetch water. Now she was so excited and in such a hurry that she forgot to take the water with her back to the city. Perhaps she left her water pot so that Jesus & the disciples could have a drink knowing she was coming back and rushed into town. Regardless, encountering Jesus changed everything!!
Her perspective changed about herself. She publicly rushed iff into town and began to invite everyone: “Come and see…” This is the same woman who appeared to be avoiding people by coming to the well at noon.
Her perspective changed about Christ. She believed in Him! This faith is reflected in her statement to the townspeople, “could this be the Christ?”

Their daily duties and responsibilities were temporarily pushed aside. The indication in the text is that they rushed out (went out with haste) of the city to meet Jesus. (28b)

Now they too put their faith in Jesus! They begged him to stay with them – they wanted to hear more!

It began with the testimony of a woman who drank of the living water that Christ offered (39). The Samaritans listened to Jesus as he talked and explained the truth over the course of the next two days. (What did they talk about? See what Jesus told Nicodemus (3:16) and the woman (4:13-14)). As a result many more Samaritans believed in Jesus as their Savior. (40-41) They testified to the woman that they too know and believe that Jesus was indeed the Christ, the Savior of the World. (42)

To those of you who are already faith followers of Jesus, the text today is pleading with you to open your eyes and see the world that Christ sees! A world that is ready! The harvest is in front of you!

To those of you who are like the Samaritans, you are searching for answers, for someone or something to satisfy your life – Repent of your sin and believe in Jesus right now!

Anybody, anywhere can come to Christ – anytime! Christ in love has intentionally “passed through Samaria” to find you! Believe in Him today!

Download the .pdf version of Perspectives on the Harvest