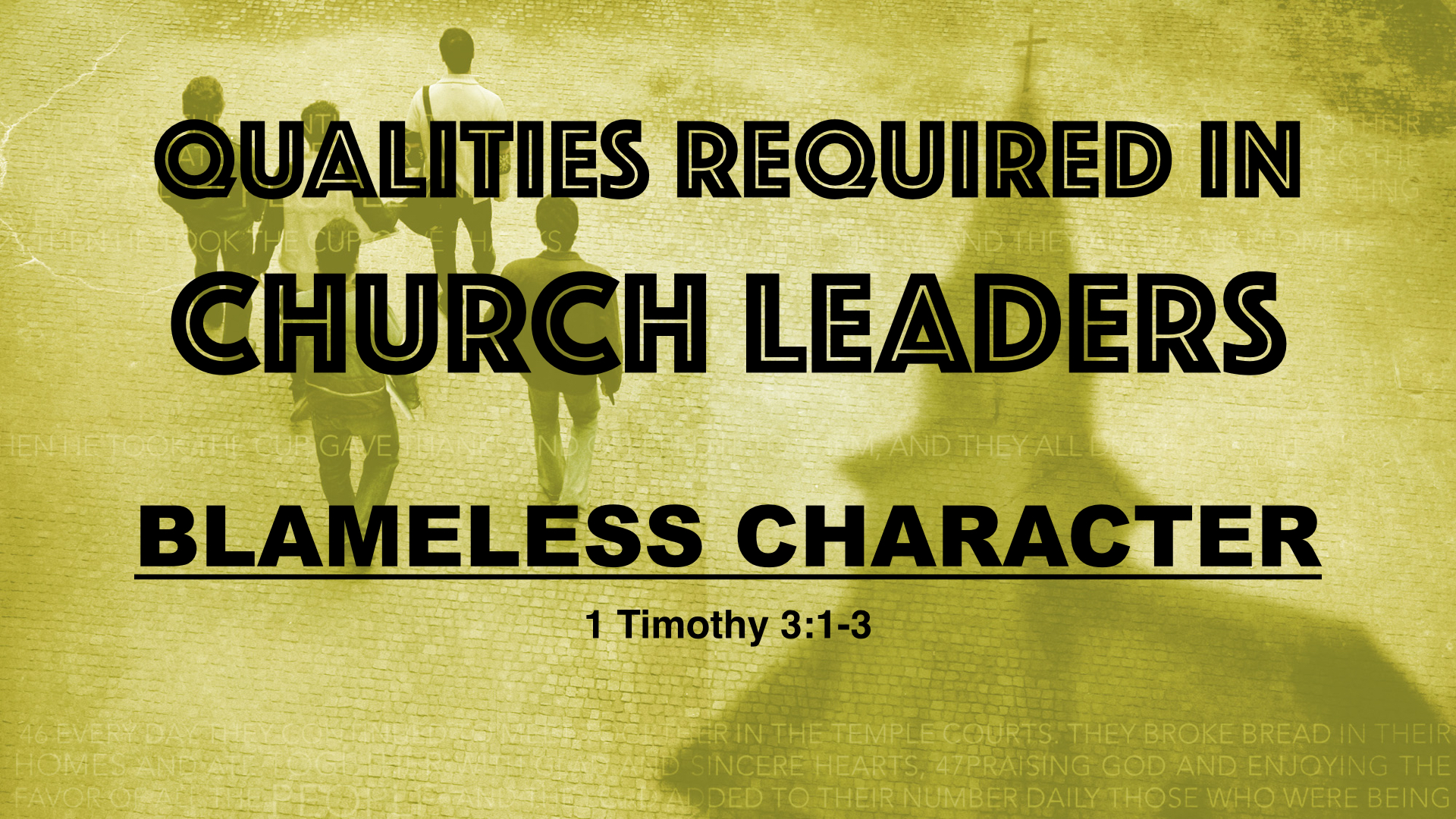 Paul is writing to Timothy, a young pastor in the city of Ephesus.  Ephesus was an influential metropolitan city of the day.  This city was known for several things: The Temple of the Goddess Diana and all of the wicked worship practices associated with it (Acts 19:24-35).  Ephesus was also known for the colosseum that hosted gladiator games.  As you enter the ancient city of Ephesus today the road is lined on either side with the tombs of the gladiators who were the heroes of Ephesus.  The city was also known for the magic arts.  People from around the world would travel to Ephesus to purchase books on magic (Acts 19:19).

The church in Ephesus was is in danger because unqualified leaders were finding their way into leadership.  Leaders were being appointed based upon the criteria of the culture of the day or based upon standards of successful business practices of the day.  Paul is writing to Timothy in order to correct this problem.

People do not usually rise above their leaders! The character and effectiveness of any church is directly related to the quality of its leadership. Failure to adhere to biblical standards for leadership has caused many of the problems in the church today.

This is a list of required character qualities that is impossible for us.  In our humanness we cannot live out what God requires.  This is exactly why God has given His Holy Spirit to dwell inside every child of God.  The Spirit of God empowers us to do what otherwise is impossible.

If you are investigating the claims of God, but have not yet put your faith and trust in Jesus Christ, you cannot live a blameless life in these areas.  The hope I offer to you today is that if you will come to Christ you too can receive His power live blameless in these areas!

Let me quickly review the territory we have already covered in our text in a previous message and then we will look at the final four character qualities mentioned:

So let’s pick up from here and discuss the final four qualities in greater detail:

A Church Leader Must Be Gentle (3)

Gentleness or meekness is not weakness, rather it is power under control (II Ti. 2:24).  Gentleness means that he easily pardons human failure. It is the ability to remember good and forget evil. He doesn’t keep record of wrongs people have committed against him.

Being gentle means he is able to take criticism without reacting.

Some people pride themselves in never forgetting an offense.  They keep a mental spreadsheet where they carefully log all offenses.  When the information is needed they are able to pull up wrongs done in the past, complete with date and time!  This is not how God wants us to live in relationship with one another.

These people are angry.  Anger that is not dealt with turns into resentment and then bitterness – these are sins that destroy the one who holds onto them (Eph. 4:26-27).

A church leader who is gentle is a leader that is not looking for a fight. CH Spurgeon commented to his pastoral students, “Don’t go about the world with your fist doubled up for fighting, carrying a theological revolver in the leg of your trousers.”

A Church Leader Must Not Be Quarrelsome (3)

He is not short-tempered or disposed to argue and fight.  He is not contentious. He is not always taking the opposite side in discussions. He is a peacemaker (Mt. 5:9).

This describes someone who doesn’t have money but loves it and desires it. It speaks of Indecent or dishonorable gain. An elder or a deacon must not go after gain that would dishonor his character (I Pt. 5:2).

Love of money can corrupt a man’s ministry because it tempts him to view people and ministry opportunities as a means by which he can get more money. Greed for money is the chief characteristic of false teachers (I Ti. 6:6-10).

Money is not the only things can be coveted, we can covet popularity, respect, position, or a large ministry.

The Ephesian church needed to examine her leaders in the light of biblical qualifications. Church leadership is not a popularity contest, it is not for those who have physical and mental giftedness but who lack Christian character. The future of any church depends upon the quality of its leaders.

God does not have a double standard – one for leaders and one for other believers. These qualifications apply to EVERY believer. However in leaders it is absolutely critical.

The congregation will learn what they see modeled in their leadership. IT MUST BEGIN WITH THE LEADERS!