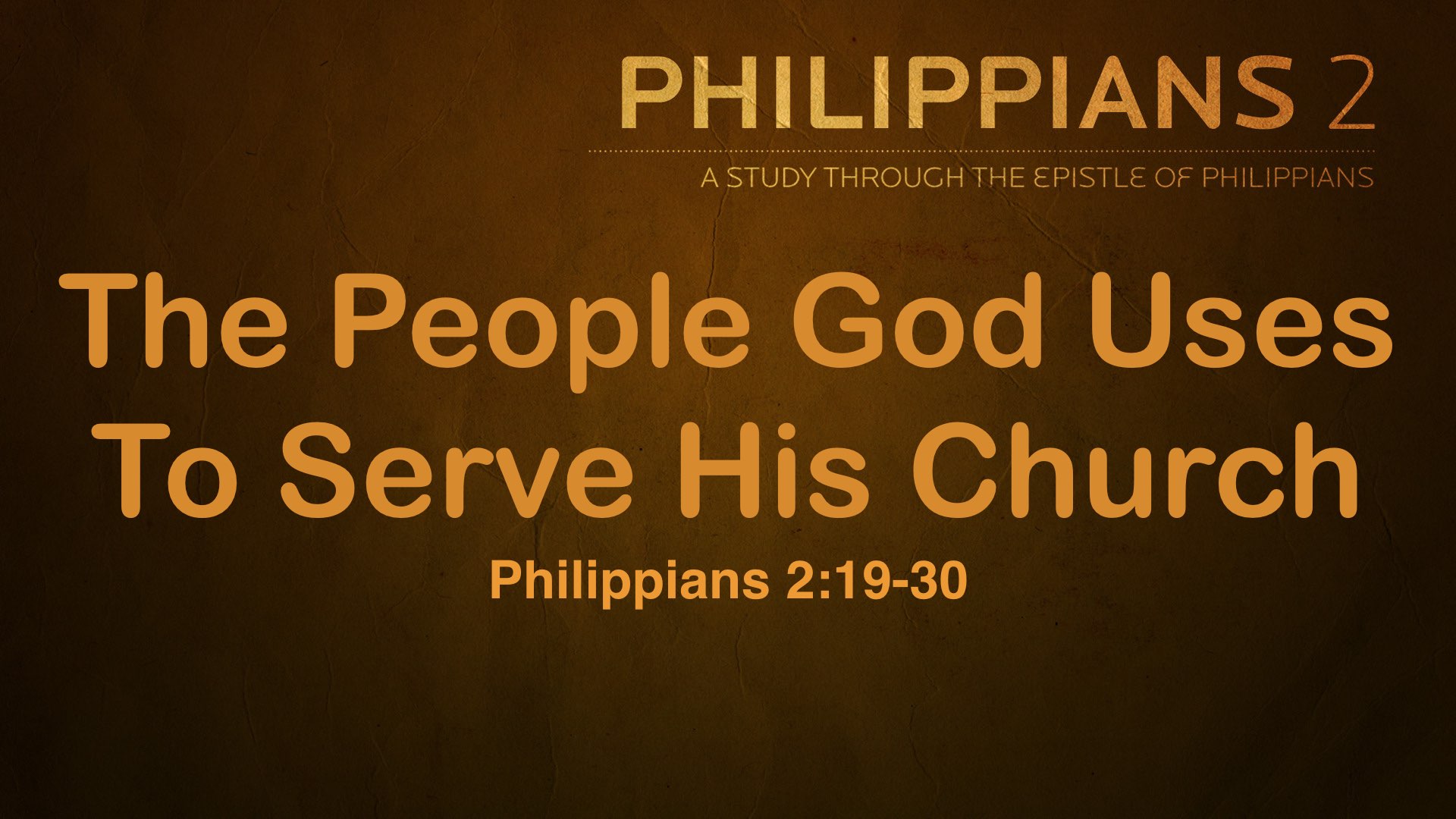 Today in our text Philippians 2:19-30, we see the people God uses to serve His church.

The context helps us understand the environment of the people Paul is writing to.  Paul is calling the Philippian Christians to behave as citizens worthy of the gospel of Christ (1:27). Philippi was a Roman colony with a population of 10,000. It was considered a ‘Little Rome’ with allegience to the emperor. Philippi adopted Roman dress and spoke Latin. A Roman citizen took great care not to do anything that would bring shame to his ‘polis’ (city).  A citizen was one in good standing whose conduct brings honor to the political body to whom he belongs.

Paul’s point: If citizens of Philippi were so devoted to a human kingdom how much more should believers be devoted to a heavenly kingdom.

God is at work building His church. The church is the called-out assembly of New Testament believers. In the building of His Church God calls and uses people – people like you and me, and people like Timothy and Epaphroditus who we will meet in our text today.

What kind of people does God use to serve His church?

They individually have a relationship with God through saving faith. These were genuine Christians – they had come to recognize that they were a sinner, and they needed someone outside of themselves to deliver them from the guilt, and the power, and condemnation of God that sin brings

Let me illustrate this way: There is an organization called the FreeMasons – you may have heard of them? By joining this secret organization and going through the rites, you can move deeper into the brotherhood. Free Masonary calls “God “The Great Architect of the Universe.” This is the Freemason’s special name for God, because He is universal. He belongs to all men regardless of their religious persuasion. All wise men acknowledge His authority. In his private devotions a Mason will pray to Jehovah, Mohammed, Allah, Jesus, or the Deity of his choice. In a Masonic Lodge, however, the Mason will find the name of his Deity within the Great Architect of the Universe. Such syncretistic worship through prayer, coupled with specific teachings of salvation, is completely at odds with biblical Christianity.”

There is only one way that anyone and everyone can have a relationship with God – believe in Jesus Christ and trust Him for forgiveness! Jesus is the only way to God and no-one will come to heaven apart from coming through Him!

Because they share the same Spiritual Father (God) they have a relationship with one another
This was not a relationship based on physical similarities:  Paul was a Jew, former “Pharisee of Pharisees”, an OT scholar deeply trained in the Law of Moses (Torah) and the Talmud – the instruction book written by Hebrew scholars to guide people to not transgress the Torah. He was a bold, courageous pioneer for the gospel. (Acts 23:6, Phil. 3:5) Timothy was half-Jew. His mother had broken the Jewish culture and OT traditions by marrying a Gentile husband. This man was an unbeliever, he held to the pagan traditions of the day. His son Timothy was not circumcised, which to an orthodox OT believing Jew was a sign of being outside the covenant and condemned. His mother embraced genuine faith in Jesus, and eventually Timothy did as well. (Acts 16:1, 2 Ti. 1:4-5) Epaphroditus – only mentioned here in Philippians. His name is a common Greek name of the day. A Gentile believer in the church at Philippi. (25, 4:8)

The basis of this relationship is the fact that they shared the same nature as one another! The same Spirit of God dwelt inside them. The were obedient to the Father. God is their father, and they God’s children by faith in Christ thus they were brothers with one another! (2:3,7-8)

Gospel work requires commitment and the willingness to sacrifice. Why would we give a deep level of effort and commitment to our own agenda, job, but fail to give God the same level of commitment?

Gospel work is shared work! It is not intended to be done by one! We are “laborers together with Christ” (4:2-3). Every member a minister – we all have a calling, not just the teaching pastor! Each of us have been granted gifts by God for the purpose of co-laboring, working together to accomplish God’s purposes.

THEY ARE WARRIORS – Fellow soldier (25)

We are engaged in a spiritual war. Our enemies: World, Flesh, Devil. Our warfare is spiritual not physical – “Stand against the wiles of the devil…” (Eph. 6:10-12)

THEY ARE PEOPLE OF CHARACTER (22)

Our lives must manifest the transforming power of Christ.

“When church leadership fails morally and are restored to leadership in the church, when members lie, steal, cheat, gossip and fight. When members seem to care little about hypocrisy in their midst, the world is repulsed by the claims to love and serve God.” MacArthur

Character is proved in crisis! Your Character was revealed in how you responded to your last crisis. How did you react when:

Timothy was a man of tested character and his character was visible and viewable. Will you do what is right even when everyone else is doing wrong?

They had genuine concern for others, especially the family of God. This is a care that is not hypocritical. To be genuine means to be real! Sometimes we care and we don’t have an opportunity to do anything, but when we do have opportunity we demonstrate loving care!

This care is a result of caring for what God cares about. The opposite is to be self-serving, seeking their own advancement.  “They do not seek the things of Christ” – Compassion, care.

Genuine agreement in the faith. This is the plea that Paul makes to the Philippians throughout the letter – be of one mind. (1:27, 2:2-3; Eph. 4:1-6). Our source of agreement is found in the Word of God as we “strive together for the gospel.”

We serve God by serving one another. This is love in action, the humbling of our selves to serve the least, the underserving. The love that we have for Jesus Christ constrains us to this service. Jesus having loved his own He loved them to the end, arising from supper he took the basin and the towel and washed their feet. This was done as an example that we should do as He has done. They honestly consider others better than themselves and seek to serve them.

The result of being this kind of person is you become a source for encouragement and joy to God’s people (28b,29a). The church honors those who serve in this way (29)

Are you this kind of man or woman?  What areas do you need to address this week?