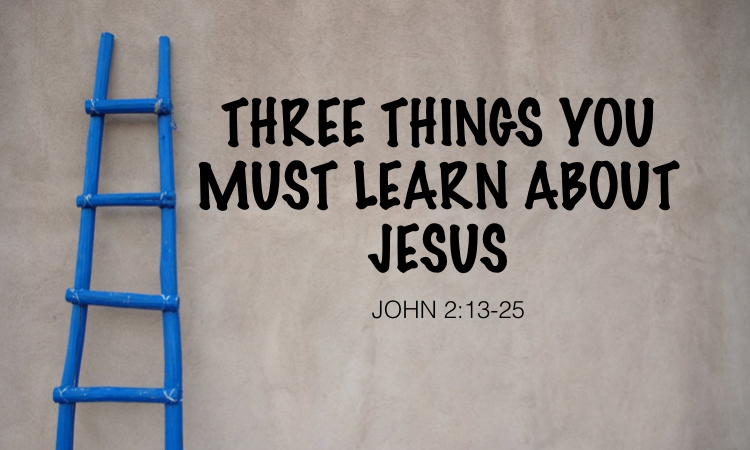 A businessman seeking professional counsel was asked by his counselor to describe his life. He said, “I have come to the end of my life; I have climbed the ladder of success to the top only to realize that my ladder has been leaning against the wrong wall.”

The passage under consideration this morning is found in John 2:13-25.  Jesus has traveled from Cana in Galilee some 14km to the city of Capernaum.  Capernaum is called “the City of Jesus” because it seems that he used it as a staging area, a home base for his ministry when in the Galilee.

But now Jesus is on the move with thousands of other people toward Jerusalem.  A new year has dawned and the most important feast of the year is scheduled to take place: Passover.

From this account there are three things that you must learn about Jesus.  These truths will bring our lives into focus in relationship with God!  None of us want to climb the ladder only to realize it was leaning against the wrong wall!

Place: Jesus traveled from Capernaum in Galilee south to Jerusalem

Time: This is the first month of the year on the Jewish calendar, the month Nissan.  Passover is celebrated the evening of 14th Nissan which corresponds to April/May on our calendars.

Event: The Passover Celebration.  The story of Passover is found in Exodus chapter 12. The people were to take the lamb into their house to live with them from the 10th-14th Nissan.  On the evening of the 14th they were to kill the lamb and put the blood on the doors and lintel of their home.  The home is carefully inspected and cleansed from all leaven.  From the 14th-21st Nissan the feast of unleavened bread is observed. All of this served as a reminder that each person must carefully inspect their life for sin because the Lamb had given his blood so that judgement would pass over them. 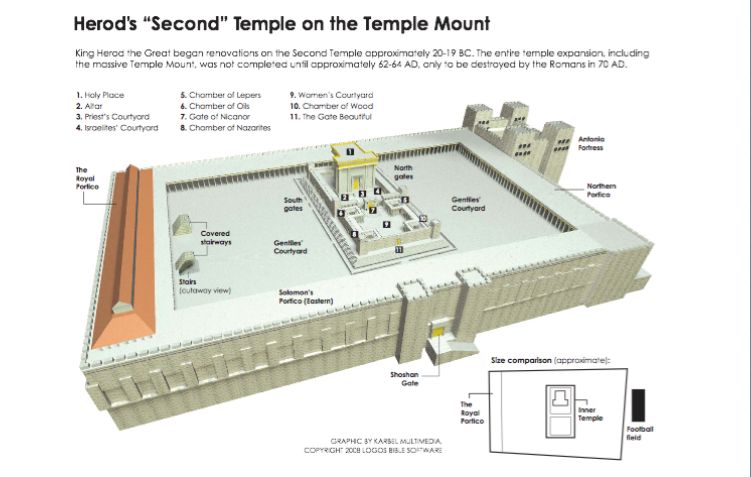 Place: Temple.  Every year all males aged 12+ were to travel to Jerusalem and present themselves at the Temple to make sacrifice and pay the temple tax of 1/2 Shekel. Some estimate that in Jesus’ day there were over 2million people in Jerusalem during passover.

The Temple was a holy place set aside for the special purpose of worship to the God of Israel.  It was the place where God came down in all His glory in the Holy of Holies on the Ark of the Covenant to dwell among his people.

The Temple was also the place where atonement was made for the sins the people through the sacrificial system of lambs, oxen and doves.  Blood was shed as a reminder of the severity of sin.  God would see the repentance of his people and accept the blood sacrifice, thus withholding his punishment for their sins.

The problem is two-fold. First the people had lost the perspective of the majesty and holiness of God.  It was much like it had been for the past 400 years.  The Prophet Malachi had written the last words of God to His people:

The second problem was that they had perverted the place of worship using it for their own selfish agendas and for economic advancement.  The Temple had been to a market where they were consumed with business at the expense of worshippers. One commentator says they were charging 700% profit on doves.

The Temple tax could only be paid with “clean” Temple money.  Those who traveled to Jerusalem from Roman held territories were required to exchange their currency for Shekels.  Moneychangers were making a killing on exchange rates.

Later in His ministry when Jesus cleansed this Temple for the second time it is recorded:

Matthew 21:12-13
12 Then Jesus went into the temple of God and drove out all those who bought and sold in the temple, and overturned the tables of the money changers and the seats of those who sold doves. 13 And He said to them, “It is written, ‘My house shall be called a house of prayer,’ but you have made it a ‘den of thieves.’ ”

Worshippers were required to have their sacrificial animals inspected and certified as “clean”.  Official Kosher inspectors were in league with the animal sellers and profits were soaring. The high priest had his hand in the business by selling franchises for money exchange booths and animal sale stalls.

And all of this was taking place in the court of the Gentiles! This was where Gentiles were welcomed to observe the worship of the one true God!

The problem was one of idolatry.  The people were motivated by covetous greed!

Colossians 3:5
Therefore put to death your members which are on the earth: fornication, uncleanness, passion, evil desire, and covetousness, which is idolatry.

First it was a response of anger.  Christ made a whip and drove them and their livestock off the Temple Mount.  He then turned on the money changers and threw over their tables!  He was angry for the glory of God.

Anger is a divinely implanted emotion. Closely allied to our instinct for right, it is designed to be used for constructive spiritual purposes. The person who cannot feel anger at evil is a person who lacks enthusiasm for good. If you cannot hate wrong, it’s very questionable whether you really love righteousness. – Dr. David Seamands

Jesus’ anger was fueled by His love for God (17).  What makes you angry says a lot about what you love.

Psalm 69:9
Because zeal for Your house has eaten me up,
And the reproaches of those who reproach You have fallen on me.

Second it was a response of authority! Jesus referred to the temple as “my Father’s house.” He commanded them to clean the place up, to remove the doves… and they did!

Jesus had just cleaned out the temple.  This was something they knew was right the right thing to do, and something they themselves were responsible for.  They asked for a sign of His authority.  Jesus pointed them to His own death and resurrection.  They misunderstood his words and dismissed them.  After He rose from the dead they tried to cover up and instructed the soldiers to lie and say that disciples had stolen the body.

He would lay down his life and take it up again on Passover three years later.

This would be the ultimate sign of His supreme authority.  His Disciples would remember these words and believe the Scripture and the words that Jesus taught. (22).

Though Jesus was speaking of His body, the physical temple was destroyed in 70AD when Rome sacked Jerusalem and tore down the Temple.  Since that time God has not dwelt in a place, rather He has dwelt in a body!  If you have put your faith in Jesus Christ for salvation YOU ARE the temple of God!

1 Corinthians 6:19-20
Or do you not know that your body is the temple of the Holy Spirit who is in you, whom you have from God, and you are not your own? 20 For you were bought at a price; therefore glorify God in your body and in your spirit, which are God’s.

We see that demonstrated by the masses in Jerusalem. Mental assent to undeniable facts is not saving faith.  The people believed He was Messiah but they did not receive Him as Messiah.

John 1:12
But as many as received Him, to them He gave the right to become children of God, to those who believe in His name:

If you believe that the historical Jesus is God, if you believe He is Messiah that alone makes you no different than the Devils.

James 2:19
You believe that there is one God. You do well. Even the demons believe—and tremble!

There are three possible responses to Jesus – we see them in this text:

You may be reading this Bible study and you have saving faith – the question for you to take away is this:  Is your temple clean?

Make sure that at the end of your life you don’t find your ladder leaning against the wrong wall! Become a disciple of Jesus Christ today through saving faith!

Here is the .pdf download of Three Things About Jesus Web.