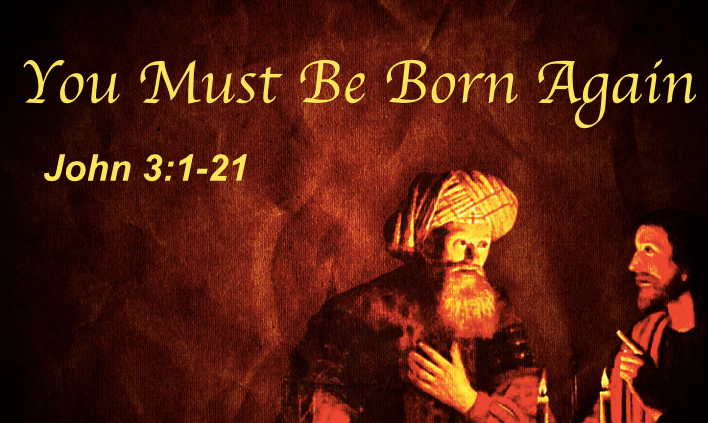 You may be the man in our story today!  His name? Nicodemus. He was a sincere, honorable man, respected among his peers, having committed his life to serve God. Yet for all those admirable qualities Nicodemus was spiritually dead, living in darkness… condemned.

This story should make each one of use face the sobering reality that if Nicodemus was lost – then each one of us would be wise to evaluate our own life, because we may be just like him!

This is my prayer: that you will pause right now and ask God over the next few minutes as we look at this text to show you if you are Nicodemus.

This text – John 3:1-21 – is one of my favorite passages in the New Testament! The conversation that Jesus had one evening in Jerusalem contains what has become the best known verse in the world; John 3:16:

For God so loved the world that He gave His only begotten Son that whosoever believes in Him should not perish but have everlasting life.

The Pharisees were theological conservatives within Judaism. They were known as guardians of truth, defenders of orthodoxy. They did not deny cardinal doctrines like the resurrection as their counterparts the Sadducees did (Luke 20:27).

The Pharisees were biblical separatists who held Scripture as the rule of faith and practice. As defenders of the Torah (God’s Law) the Pharisees developed what many saw as a very helpful system to guide new converts and old alike who might struggle to otherwise apply God’s law and precepts to everyday life. this practical guide to life was known as the Talmud. This is often called the “tradition of the fathers” (Mark 7:3-5).

He was very respected

Nicodemus was a ‘Ruler of the Jews’. This refers to his membership in the Sanhedrin. The Sanhedrin was made up of 70 leaders after the example of Moses’ elders in the wilderness. This group was made up of the High Priest, elders and teachers of the law and held a limited degree of power and autonomy under King Herod.

In verse 10 Nicodemus is referred to as “the teacher in Israel” which may indicate that he was the lead teacher among the Pharisees.  Regardless, he was a respected influential insider! (see John 7:50)

He was reaching out for answers

Nicodemus was intellectually honest – “we know you are a teacher come from God…” He wanted to find out who Jesus was and what he was really believed. So he came to meet Jesus at night – perhaps he did not wish to openly be seen inquiring of Jesus so that he could escape uncomfortable questions that might be asked. Whatever the reason for the time of the meeting, his heart burned with questions that he wanted answered.

THE MESSAGE JESUS PREACHED TO NICODEMUS IS THE MESSAGE YOU MUST HEAR AND UNDERSTAND! (2-13)

Jesus statement to Nicodemus cut through all formalities and small talk and drove straight to the heart of what Nicodemus was searching for.  Jesus introduced in no uncertain terms the new birth!  Jesus made it clear that this is new birth:

Jesus also points out to him that the new birth is something that had not yet happened to Nicodemus.

Bottom line is this:  If you want to enter the Kingdom of God, you must be born physically and you must be born a second time, this time spiritually!  So how does one go through this second birth?

This testimony is reliable because Jesus is the one testifying (11-13).  Nicodemus had to believe Christ’s testimony regarding the new birth, and so must you or you will never enter the Kingdom of God!

Illustration was something very familiar to Nicodemus (Num. 21:4-9)

Nicodemus was a teacher of the law! He particularly knew the first five books of the Old Testament called the Torah, or “the Law”.  Jesus reached back into the Torah and pointed to an event that would illustrate the importance of the new birth.  This illustration became a window that shined light on the truth that Jesus was explaining and that Nicodemus was struggling with.

The illustration provided a visual explanation of the faith required to be born again. You can find the full account of what Jesus is referring to in Numbers chapter 21.  Here is the story in outline form.

It is clear that these people were in trouble and could not do anything to save themselves from  certain death!  God must intervene.  And he did!

It is the same for you today! God must provide the solution, God must open your ears to hear the message, God must draw you to receive the message.

William Ogden captured this truth in this poem written in 1887:

Life is offered unto you, hallelujah!  Eternal life thy soul shall have,  If you’ll only look to Him, hallelujah!  Look to Jesus who alone can save.

Just as Moses lifted up the snake on the pole, even so MUST the Son of Man be lifted up. The lifting up of Christ on the cross was necessary for us to be born again! Why?

The poison of sin is killing you – the wages of sin is death! God’s love for you was so great He chose to sacrifice His own Son so that He could rescue you!

Romans 5:8 – God demonstrated His love to you in that while you were still a sinner Christ died for you!

Jesus Christ did not come to condemn us, we are “condemned already”, Jesus came to save us!  To provide the means by which the Spirit of God can birth us into the family of God!

So let’s look at it from the perspective of someone who is condemned as we conclude our study.

Here is the final question to take away from this study: Are you Nicodemus?

He was trying to live a good and religious life that would be pleasing to God but he had never been born again spiritually! His faith was in his standing at his “church”, his reputation as a Bible teacher, his good works as a Pharisee – but he was not looking in faith to Jesus.

Nicodemus was invited to look to Jesus and live!

You Must Be Born Again!  Are you?

If you desire help with answering this question please get in touch philhunt66 (at) gmail.com or in the Kitwe area on cell 0976153466.

You Must Be Born Again Upload