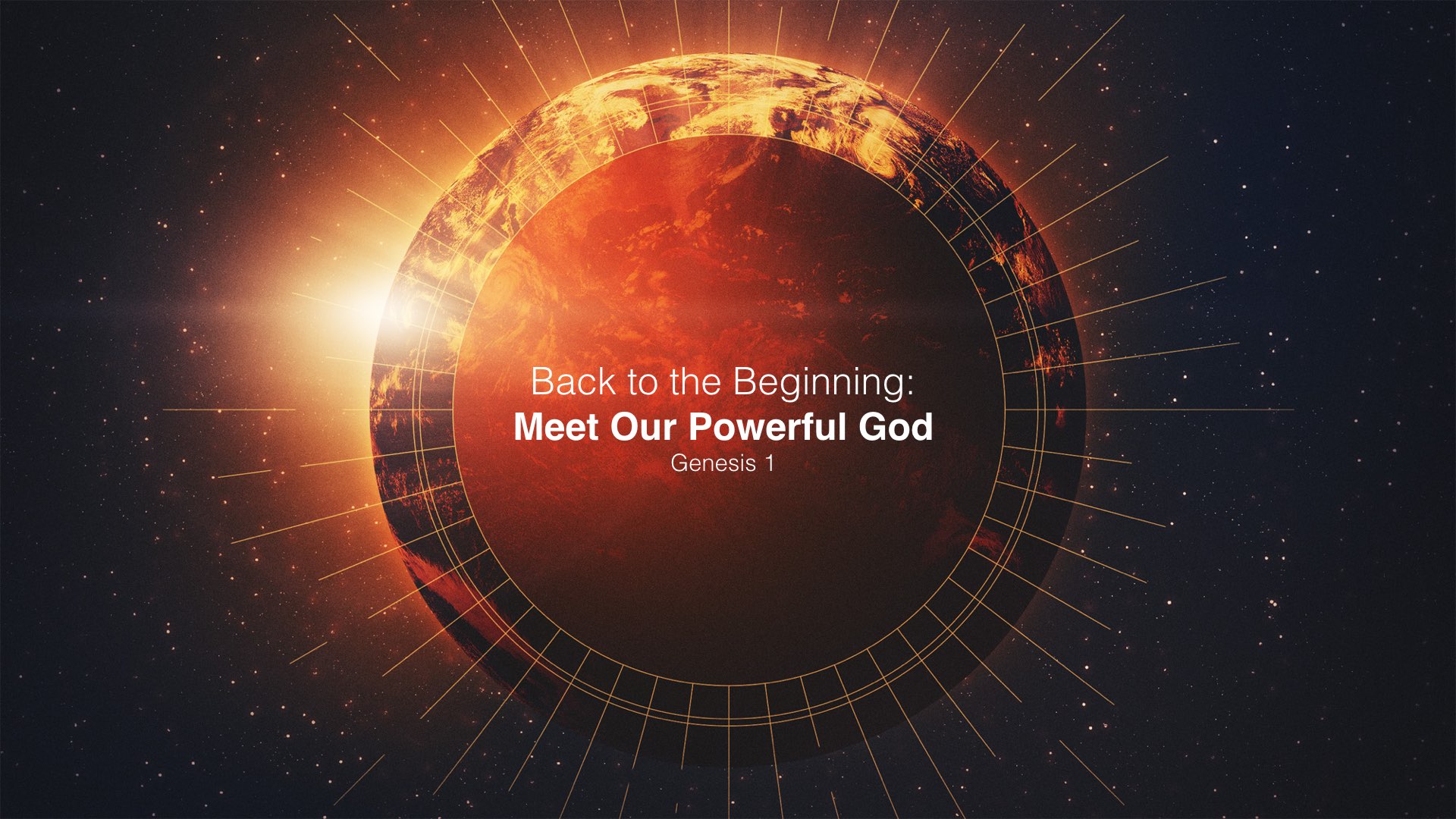 This morning I would like for you to meet God. When we make an introduction of someone we often give a framework by which others can understand and identify themselves. How would you introduce yourself?

Genesis means beginning and the first in our Bible is the Book of Genesis. Genesis gives us the beginning of almost everything: Universe, world, home, family, marriage, sin, redemption.

Right at the beginning we are given answers to life’s greatest questions:

We must get the beginning right so that when we reach the end we are in the right place!

The Physicist & Comologist Steven Hawking has received many prestigious awards for his work. In the 1980’s his wife Jane in an interview described her role as “simply to tell him that he’s not God”. In 2011, when narrating the first episode of the American television series Curiosity on the Discovery Channel, Hawking declared: “We are each free to believe what we want and it is my view that the simplest explanation is there is no God. No one created the universe and no one directs our fate. This leads me to a profound realization. There is probably no heaven, and no afterlife either. We have this one life to appreciate the grand design of the universe, and for that, I am extremely grateful.” (https://en.wikipedia.org/wiki/Stephen_Hawking)

This brilliant and accomplished man has concluded that “everything began with a big bang and ends in a black hole.”

Overview of the Book:

Genesis written by Moses @ 1446-1406 B.C. so that the Jewish people would understand where they came from and how God chose them from among the peoples of the earth.

This is really an incredible book of Beginnings! If you have never read it, I hope you will do so right away! Over the next three weeks I want us to go “Back to the Beginning” to get a right perspective of God that will set the context for everything else: our relationship to God, our relationship with one another, and God’s purpose for our life.

God is eternal – “in the beginning God…” God existed before the beginning. “Before Abram was I am!” God had no beginning and has no end, He is eternal. He has no need for anything or anyone outside of Himself!

“Before the mountains were brought forth, Or ever You had formed the earth and the world, Even from everlasting to everlasting, You are God.” Ps 90:2

God is one yet exists in three persons:

Fool – one whose judgment is warped and tainted by an evil mind and wicked desires, not someone who is a simpleton. The fool says “no God,” not for me, I’ll not have a God! To deny God is to make a bold declaration of faith in spite of overwhelming evidence to the contrary.

“You alone are the LORD; You have made heaven, The heaven of heavens, with all their host, The earth and everything on it, The seas and all that is in them, And You preserve them all….” Ne 9:6

Intelligent design requires an intelligent designer. Planets and moons spin in opposite directions. If a big bang they would all spin the same way. Wrist watch – The atheist, agnostic, and evolutionist would say: “No one planned this watch, no one made it. It just happened by accident as a result of forces and circumstances over thousands and millions of years.

God created all things for His pleasure

““You are worthy, O Lord, To receive glory and honor and power; For You created all things, And by Your will they exist and were created.”” Revelation 4:11

Or think of it this way: it takes 30yrs to accumulate 1bn seconds. So if you were to place 1 billion bills on edge in a line beginning in Kitwe your line would stretch just past Nsobe Lodge and stacking them one per second it would take you 30 years to get there.

But wait… that is just to understand one billion… our observable universe is 13.8 billion light years. A light year is the distance light travels in one year moving at a speed of 299,792 km per second. Traveling at the speed of light a traveller would circle the equator 7.5x per second.  And God created it all in an instant by simply saying the words, “Let there be…”

Life has in it the seeds for new life (11a). Life results in fruit

““But other seed fell on good ground and yielded a crop that sprang up, increased and produced: some thirtyfold, some sixty, and some a hundred.”” Mark 4:8

Life results in fruit according to its kind (11b). If we are a child of God we will reproduce ourselves spiritually.

We are to be light-bearers to a dark world ““You are the light of the world. A city that is set on a hill cannot be hidden.” Matthew 5:14

Day 6 – Let there be earth creatures and man (24-26) ILL: Chameleon, watching the lions

God’s commands are God’s blessings… let there be… there was. God who created us knows what makes us tick, what will satisfy and fulfill us; so he blesses us by commanding us to do that very thing. Do God’s will!

“Ah, Lord GOD! Behold, You have made the heavens and the earth by Your great power and outstretched arm. There is nothing too hard for You.” Jeremiah 32:17

“My help comes from the LORD, Who made heaven and earth.” Psalms 121:2

If God is powerful and wise enough to create the world, I can trust He knows best in my life.

“He has made the earth by His power; He has established the world by His wisdom…” Jeremiah 51:15

Because of creation, you are without excuse:

“because what may be known of God is manifest in them, for God has shown it to them. For since the creation of the world His invisible attributes are clearly seen, being understood by the things that are made, even His eternal power and Godhead, so that they are without excuse,” Romans 1:19,20